As the month began, Lincoln continued preparing for his inauguration on March 4. In so doing, he reiterated that while he did not object to compromise efforts, some issues would not be open for negotiation. Lincoln sent advisors to Republican congressmen in Washington to deliver Lincoln’s views. Lincoln also wrote to his Secretary of State-designate William H. Seward, serving out his term as a U.S. senator from New York:

“I say now, however, as I have all the while said, that on the territorial question—that is, the question of extending slavery under the national auspices,—I am inflexible. I am for no compromise which assists or permits the extension of the institution on soil owned by the nation. And any trick by which the nation is to acquire territory, and then allow some local authority to spread slavery over it, is as obnoxious as any other.”

Around the same time Horace Greeley, editor of the influential New York Tribune, published an editorial excoriating Lincoln for asserting that the southern states should not be allowed to secede:

“Lincoln’s latest speech contained ‘the arguments of the tyrant—force, compulsion, and power.’ ‘Nine out of ten people of the (North)’ are opposed to forcing South Carolina to remain in the Union. ‘The great principle embodied by Jefferson in the Declaration is… that governments derive their just power from the consent of the governed.’ Therefore, if the southern States want to secede, ‘they have clear right to do so.’”

On the 6th, the Lincolns held a farewell reception in their Springfield home for friends, politicians, and people flocking from throughout the country. Mr. and Mrs. Lincoln stood together in their first-floor parlor and welcomed some 700 guests from 7 p.m. until midnight. According to the Baltimore Sun, the guests comprised “the political elite of Illinois and the beauty and fashion of the area.” A reporter noted, “Mrs. Lincoln’s splendid toilette gave satisfactory evidence of extensive purchases during her late visit (last month) to New York.” The New York press called the reception “the most brilliant affair of the kind witnessed here in many years.”

Lincoln spent the next few days finalizing plans to stop at various cities on his train ride to Washington, as the family moved from their home to a hotel. On the 11th, over 1,000 people gathered in an early morning rain to bid farewell to the Lincolns at Springfield’s Great Western Station. Lincoln shook hands and spoke with friends and neighbors in the station waiting room before boarding the train at 7:55 a.m. 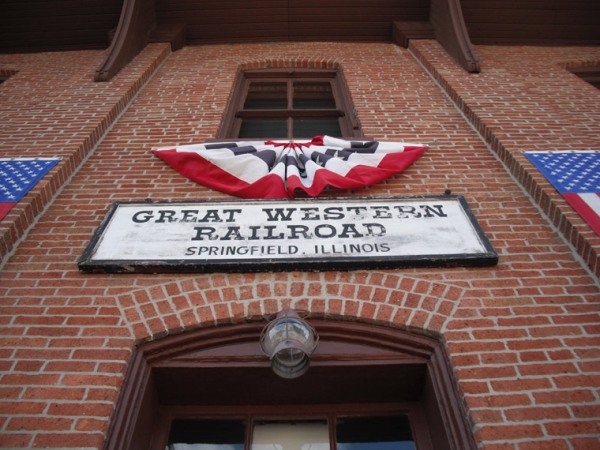 Surrounded by family, friends, secretaries, politicians, and military officers, Lincoln addressed the crowd from the platform of his private car:

“Here I have lived a quarter of a century, and have passed from a young to an old man. Here my children have been born, and one is buried. I now leave, not knowing when, or whether ever, I may return, with a task before me greater than that which rested upon Washington. Without the assistance of the Divine Being, who ever attended him, I cannot succeed. With that assistance I cannot fail. Trusting in Him, who can go with me, and remain with you and be everywhere for good, let us confidently hope that all will yet be well. To His care commending you, as I hope in your prayers you will commend me, I bid you an affectionate farewell.”

The train made several stops on its eastward trek into Indiana, where Lincoln spoke to cheering crowds. The train stopped for the day at Indianapolis, where 34 cannon representing the 34 states roared upon its arrival. Governor Oliver P. Morton met Lincoln, and a throng of 20,000 people escorted the party to the Bates House. Lincoln delivered his first speech since the election from the balcony. He declared, “It is your business to rise up and preserve the Union and liberty, for yourselves, and not for me.”

Lincoln voiced opposition to “coercion,” an example of which would be if an army marched into South Carolina without prior consent of its people. But he asked if it would be coercion “if the Government, for instance, but simply insists upon holding its own forts, or retaking those forts which belong to it?” If that was coercion, then “the Union, as a family relation, would not be anything like a regular marriage at all, but only as a sort of free-love arrangement.” Most spectators supported Lincoln’s speech.

Lincoln resumed his journey on his 52nd birthday by traveling from Indianapolis to Cincinnati, Ohio, with various stops along the way. Among his brief statements to welcoming crowds, he urged the people to stay true to themselves and the Constitution.

At Cincinnati, Lincoln delivered a rambling speech before a large reception for him at the Burnet House. He told the crowd that their greeting “could not have occurred in any other country on the face of the globe, without the influence of the free institutions which we have increasingly enjoyed for three-quarters of a century… I hope that while these free institutions shall continue to be in the enjoyment of millions of free people of the United States, we will see repeated every four years what we now witness… I hope that our national difficulties will also pass away.” Lincoln also assured a delegation of German-Americans that he would not wait until the last moment to divulge his course of action regarding the national crisis.

The Lincoln train reached the Ohio capital at Columbus on the 13th, where Lincoln received a telegram informing him that Congress had confirmed his victory in the presidential election by officially approving the electoral college vote count. Brevet Lieutenant General Winfield Scott had mobilized troops in Washington in case secessionists tried preventing the votes from being counted, but there was no interference.

In Columbus, Lincoln seemed to ignore reality in a speech to the Ohio legislature, saying:

“I have not maintained silence from any want of real anxiety. It is a good thing that there is no more than anxiety, for there is nothing going wrong. It is a consoling circumstance that when we look out there is nothing that really hurts anybody. We entertain different views upon political questions, but nobody is suffering anything.”

The large celebration for Lincoln in Columbus included a reception at the home of Governor William Dennison, and an elaborate military ball.

The next day, the Lincolns left Columbus for Pittsburgh, with the president-elect delivering brief speeches at the stops in between. At Pittsburgh, Lincoln addressed a crowd in the rain on the 15th. Ignoring the state of affairs, Lincoln declared that “there really is no crisis except an artificial one!… If the great American people will only keep their temper, on both sides of the line, the troubles will come to an end…”

Lincoln then traveled to Cleveland through a snowstorm, where a large crowd and cannon fire greeted him. He said, “I think that there is no occasion for any excitement. The crisis, as it is called, is altogether an artificial crisis…” The train left Cleveland on the 16th and moved into New York State, where Lincoln spoke before the largest crowd on the trip so far. He told them that “you, as a portion of the great American people, need only to maintain your composure.”

The Lincoln train moved on to Buffalo on the 17th, then to the state capital at Albany the next day. Lincoln addressed several crowds, and various politicians boarded the train at the different stops. At Albany, Lincoln addressed a joint session of the New York legislature: “It is true that while I hold myself without mock modesty, the humblest of all individuals that have ever been elevated to the presidency, I have a more difficult task to perform than any one of them.”

Several dignitaries escorted Lincoln as the train left Albany on the 19th. After more short stops, the party arrived in New York City. An estimated 250,000 people greeted Lincoln as he rode to the Astor House. He admitted to a crowd that he had avoided offering specifics on his upcoming policies, preferring to wait until he could speak officially. In a short speech at the Astor House, Lincoln vowed he would never “consent to the destruction of the Union… unless it were to be that thing for which the Union itself was made.”

The next day, Lincoln met with people and groups in New York City, including Mayor Fernando Wood. Lincoln told the mayor, “There is nothing that can ever bring me willingly to consent to the destruction of the Union… So long, then, as it is possible that the prosperity and the liberties of the people can be preserved in the Union it shall be my purpose at all times to preserve it.” The Lincolns dined with Vice President-elect Hannibal Hamlin, and Lincoln later attended Giuseppe Verdi’s 1859 opera, Un Ballo in Maschera (A Masked Ball).

The journey continued the following day.

One thought on “Lincoln Leaves Springfield”