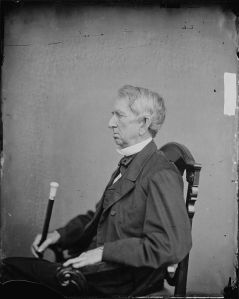 As scheduled, Seward met with Supreme Court Justice John A. Campbell, serving as liaison to the three Confederate envoys (Martin J. Crawford, John Forsyth, and A.B. Roman) in Washington. Campbell asked why Seward’s pledge of March 15 to evacuate Fort Sumter had not been carried out. Campbell also referred to Colonel Ward Hill Lamon, special agent of President Lincoln, who recently visited Charleston and pledged to South Carolina Governor Francis W. Pickens that the Federals at Sumter would be withdrawn.

Seward replied that “the president was concerned about the contents of the telegram (from Governor Pickens to the Confederate envoys on March 30)—there is a point of honor involved; that Lamon had no agency from him, nor title to speak.”

Seward provided a written assurance for Campbell to deliver to the envoys: “I am satisfied the government will not undertake to supply Fort Sumter without giving notice to Governor Pickens.” Because this differed from Seward’s earlier pledge to evacuate, Campbell asked, “What does this mean? Does the president design to supply Sumter?”

Seward said, “No, I think not. It is a very irksome thing to him to surrender it. His ears are open to everyone, and they fill his head with schemes for its supply. I do not think he will adopt any of them. There is no design to reinforce it.”

This answer came three days after Lincoln had issued orders through the Navy Department to reinforce Sumter. Nevertheless the Confederates handled the Sumter dispute based on Seward’s assurances, which they believed had come from Lincoln. If Seward was acting without Lincoln’s knowledge, then such failure to secure the chief executive’s approval before entering into negotiations should have resulted in dismissal.

On top of this, Seward responded to Lincoln’s order to resupply Fort Sumter by drafting a memorandum on the 1st titled, “Some Thoughts for the President’s Consideration.” The memo began, “We are at the end of a month’s Administration, and yet without a policy either domestic or foreign.” Seward offered several proposals, including:

Seward concluded: “Whatever policy we adopt, it must be somebody’s business to pursue and direct incessantly… there must be an energetic prosecution… of it. Either the President must do it himself… or Devolve it on some member of his Cabinet… It is not in my especial province. But I neither seek to evade nor assume responsibility.”

Seward had been the front-runner for the Republican presidential nomination last year. He also had more experience than Lincoln in executive governance and foreign policy, having been a former governor and U.S. senator. As such, he offered to make all administration decisions on foreign and Confederate policy while allowing Lincoln to serve simply as the administration’s chief spokesman.

This was a blatant effort to cover up the secret pledge Seward had made to the Confederate envoys that Sumter would be evacuated. It was also a power grab designed to install himself as the administration’s prime minister. Although this challenge to Lincoln’s authority was further grounds for dismissal, Lincoln did not share Seward’s memo with the public. Instead, Lincoln sought to avoid publicly embarrassing Seward by contacting him privately this same day.

Lincoln reminded him that the administration did have a policy, as stated in Lincoln’s inaugural address and endorsed by Seward, to hold, occupy, and possess the forts and other Federal property. This meant that Sumter would not be evacuated, as Lincoln saw no distinction between Forts Sumter and Pickens. And as to who would decide upon future administration policy. “I remark that if this must be done, I must do it.”

Neither Lincoln nor Seward commented further on this matter.

One thought on “Seward’s Bold Memo to Lincoln”