The Battle of Rich Mountain

July 11, 1861 – A detachment of Major General George B. McClellan’s Federal force attacked an isolated portion of Brigadier General Robert S. Garnett’s Confederates near the town of Beverly in western Virginia.

By July 9, McClellan had 12,000 troops to confront Garnett’s 4,500 Confederates near the important crossroads town of Beverly in the Tygart River Valley. Garnett had divided his force to guard the northern and western approaches to the town. Lieutenant Colonel John Pegram commanded 1,300 men and four cannon five miles west of the town at Rich Mountain, and Garnett personally commanded his remaining men and four cannon on Laurel Hill, 16 miles north of Beverly. Log breastworks defended both positions.

Garnett believed that the main Federal attack would be at Laurel Hill, even after a “reconnaissance in force” resulted in the Federal capture of Roaring Run Flats in Pegram’s front. As such, he rejected Pegram’s request to launch a surprise attack.

To keep Garnett thinking that he would attack Laurel Hill, McClellan sent some 4,000 Federals under Brigadier General Thomas A. Morris from Philippi to threaten the position, bombarding the position with artillery for 10 hours on the 10th. Garnett readied his men for the attack he was sure would come. Meanwhile, Brigadier General William S. Rosecrans led McClellan’s remaining 8,000 men in three Federal brigades against Pegram’s small force.

McClellan had estimated Pegram’s strength on Rich Mountain at 2,000, 700 more than the actual total. Federal reconnaissance netted two Confederate prisoners who boasted that they had between 8,000 and 9,000 men. Reluctant to attack the mountain head-on, Rosecrans eagerly listened to local teen David B. Hart, a Unionist who told him about an obscure, unguarded wagon trail that could lead the attacking Federals around the Confederate left flank.

Rosecrans reported this path to McClellan, who agreed to Rosecrans’s plan to send one brigade in a flanking attack while leaving the other two ready as reinforcements. McClellan approved only if Rosecrans got them into position by 10 a.m. the next morning, and only if Rosecrans provided hourly reports.

The Federal attack force advanced from Buckhannon and moved all night through heavy rain. Using the same strategy that Robert E. Lee had used at the Battle of Cerro Gordo in the Mexican War, McClellan sent a detachment of about 2,000 Ohio and Indiana soldiers under Rosecrans down the little path that David B. Hart had shown them. McClellan planned to send his remaining 6,000 troops against the rest of Pegram’s works once Rosecrans’s assault began.

The march lasted longer than anticipated due to the rainstorms and the abandoned road’s poor condition. When McClellan did not receive the hourly reports from Rosecrans as required, he issued orders canceling the attack. However, Confederates captured the messenger before he could deliver the order to Rosecrans.

The Federals eventually moved up the mountain, pushing the surprised 300-man advance guard back before attacking the main body of Confederates on Pegram’s left. The defenders tried making a stand, but they soon wavered before the superior numbers. Rosecrans later told his wife, “If the enemy had disciplined troops and any enterprise, how they would have stirred us up.” McClellan heard the firing through the mountain thickets; wrongly assuming that Rosecrans was being repulsed, McClellan did not commit his remaining men to the battle. 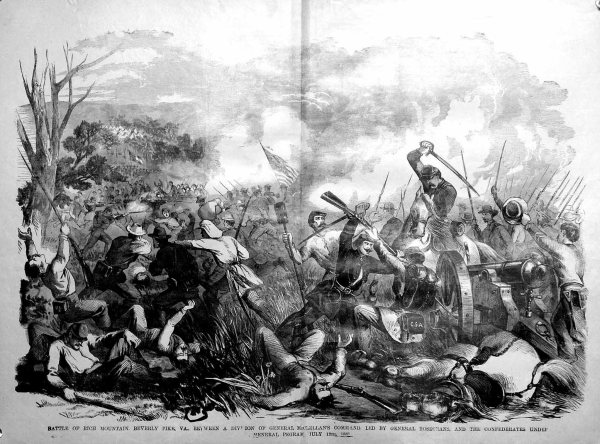 The attack became a rout when Pegram’s men retreated northeast down the mountain after three hours of combat. Pegram and his officers resolved to try joining with Garnett’s main force at Laurel Hill, about 16 miles north. The remaining Confederates withdrew from the northern crest in groups. By day’s end, about half of Pegram’s men had escaped capture due to McClellan’s failure to attack in full force. Pegram’s group kept moving through the mountainous woods, hoping to find Garnett.

Federals suffered 61 casualties (12 killed and 49 wounded), while Confederates lost 170 killed, wounded, or captured, along with two of their four cannon. Pegram’s defeat enabled the Federals to threaten Garnett’s communication lines to Beverly. Incorrectly believing that the Federals had cut him off completely from Beverly, late on the night of the 11th Garnett kept campfires burning while he pulled his men off Laurel Hill. This opened the road to Beverly for the Federals.

The engagement at Rich Mountain marked the first battle in which Confederates were defeated due to being placed in isolated locations against superior Federal numbers. McClellan eagerly accepted credit for the victory, even though he withdrew his men across Roaring Creek and Rosecrans directed the actual fighting. “Little Mac” quickly became a great hero among northerners.

The next day, some of Pegram’s men escaped to Staunton, while others reached Beverly. Pegram and Garnett could have joined forces at Beverly, but both avoided the town due to false intelligence that the Federals had already seized it. Pegram’s 550 men remained hidden in the woods, and Garnett’s 3,000 Confederates withdrew northeast over Cheat Mountain. The men then entered the Cheat River Valley, moving from Kaler’s Ford to Corrick’s Ford. General Morris, who finally realized that Garnett had retreated 12 hours after he left, sent 1,800 Federals in pursuit.

Rain poured through the morning of the 12th as the Federals seized control of the turnpike from Rich Mountain to Beverly. Confederates evacuated the town around 11 a.m., and the first of General McClellan’s 6,000 Federals entered an hour later. Based on the Federal advances, Pegram believed he was trapped against the eastern slope of Rich Mountain. Moreover, his men had gone two days without food. He wrote to McClellan:

“I write to state to you that I have, in consequence of the retreat of General Garnett and the jaded and reduced condition of my command, most of them having been without food for two days, concluded, with the concurrence of majority of my captains and field officers, to surrender my command to you to-morrow as prisoners of war. I have only to add, I trust they will only receive at your hands such treatment as has been invariably shown to the Northern prisoners by the South.”

3 thoughts on “The Battle of Rich Mountain”