Fremont, commanding the Federal Department of the West, admitted that he had consulted with nobody, including his superiors, before issuing his decree, which imposed martial law in Missouri and freed all slaves belonging to disloyal masters. Fremont took full responsibility for the order, which he called “as much a movement in the war as a battle,” and like a battle, he would “have to act according to my judgment of the ground before me.”

Regarding Lincoln’s request to change the slave emancipation order, Fremont wrote: “If upon reflection your better judgment still decides that I am wrong in the article respecting the liberation of slaves, I have to ask that you will openly direct me to make the correction,” otherwise, “to retract of my own accord, it would imply that I myself thought it wrong, and that I had acted without the reflection which the gravity of the point demanded.” He asserted that he acted “upon the certain conviction that it was a measure right and necessary, and I think so still.”

Fremont also defended his order to execute armed Missourians suspected of disloyalty: “The shooting of men who shall rise in arms against an army in the military occupation of a country is merely a necessary measure of defense,” and according to Fremont, it was valid “according to the usages of civilized warfare.” Since Lincoln had defined this conflict as an insurrection and not a war against an independent nation, the rebels “have no ground for requiring that we should waive in their benefit any of the ordinary advantages which the usages of war allow to us.”

Fremont then asked for Lincoln’s permission to enforce the proclamation, “hoping that my views may have the honor to meet your approval.”

In an unprecedented move, Fremont assigned his wife, Jessie Benton Fremont, daughter of the legendary Senator Thomas Hart Benton, to personally deliver this response from his St. Louis headquarters to the president at Washington. Mrs. Fremont arrived on the 10th not only to deliver her husband’s letter, but to persuade Lincoln to withdraw his objections to Fremont’s proclamation. Radical Republicans had emboldened the Fremonts, ardent abolitionists, by advising them that turning this conflict into a war against slavery would prevent Great Britain from recognizing Confederate independence.

Lincoln, a moderate Republican, sought to not only maintain harmony within the party but also maintain the delicate wartime alliance between the Republicans and Unionist Democrats. As such, Fremont’s proclamation had gone too far, and while Fremont’s defiance had amused the Radicals, Lincoln did not share their amusement when he met with Mrs. Fremont in the Red Room at 9 p.m. on September 10.

Without offering the lady a seat, Lincoln took Fremont’s letter from her and read it, dissatisfied that the general had refused to modify his order. Mrs. Fremont told Lincoln that he needed to consider liberating slaves to garner European support. Interrupting her, Lincoln said, “You are quite a female politician. It was a war for a great national idea, the Union, and… General Fremont should not have dragged the Negro into it.” 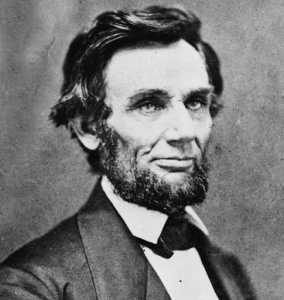 Lincoln said that he would write a reply and let Mrs. Fremont know when it was ready for delivery. Irritated, Mrs. Fremont defended her husband’s wisdom and prestige, which she contended were “above and beyond” most military officers. Lincoln later said that she “left in anger, flaunting her handkerchief before my face.”

The next day, Lincoln gave Mrs. Fremont his reply. He explained that although he “perceived in general no objection” to Fremont’s proclamation, he could not allow military commanders to override official policies mandated by Congress. Lincoln stated that the order regarding freeing slaves exceeded the Confiscation Act. Therefore, Lincoln expressed his “wish that that clause should be modified.”

Lincoln would take responsibility for removing those non-conforming portions of the decree so that Fremont would not have to admit to any mistake. Lincoln wrote:

“Your answer, just received, expresses the preference on your part that I should make an open order for the modification, which I very cheerfully do. It is therefore ordered that the said clause of said proclamation be so modified, held, and construed, as to conform to, and not to transcend, the provisions on the same subject contained in the act of Congress entitled ‘An Act to confiscate property used for insurrectionary purposes’ Approved, August 6. 1861; and that said act be published at length with this order.”

While Mrs. Fremont awaited Lincoln’s response, she was visited by Francis P. Blair, Sr., whose family was old friends with the Fremonts. However, that friendship quickly dissolved when Blair informed her that his son, Frank Jr., had written to his other son, Montgomery, recommending that General Fremont be removed from command. This prompted Mrs. Fremont to angrily declare that her husband could kill Frank Jr. in a duel.

Lincoln’s letter arrived shortly afterward, and Mrs. Fremont promptly returned to St. Louis to deliver it to the general. In addition, Lincoln granted Fremont’s request to issue an “open order” to change the proclamation by submitting the letter’s contents to the press for publication throughout the country.

While Fremont’s emancipation proclamation may have been morally just, it threatened to divide the U.S. since most politicians and soldiers were fighting to preserve the Union, not to end slavery. It also threatened to undermine Lincoln’s policies as well as those of Congress. Nevertheless, Fremont remained firm that he would not “change or shade” his proclamation because it “was worth a victory in the field.”

After sending Mrs. Fremont on her way, Lincoln wrote to her denying “being understood as acting in any hostility” toward her husband. Lincoln then addressed the increasing complaints about Fremont’s leadership by dispatching Postmaster General Montgomery Blair (Frank Sr.’s son and Frank Jr.’s brother) to assess Fremont’s command at St. Louis. Blair traveled with Major General David Hunter and Quartermaster General Montgomery Meigs, arriving at Fremont’s headquarters early on the 12th.

Two days later, both Blair and Meigs agreed in recommending Fremont’s removal. Meigs reported that “great distress and alarm prevail,” and Fremont “does not encourage the men to form regiments for defense.” Blair stated that Fremont seemed “stupefied and almost unconscious and is doing absolutely nothing.” Both men left St. Louis that day, but the Fremont controversy would continue.

One thought on “The Fremont Controversy: Fremont’s Retort”