The Battle of Belmont 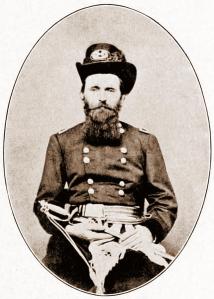 Grant, commanding 20,000 Federals at Cairo, received orders from Major General John C. Fremont on November 1 to make a demonstration on both sides of the Mississippi River to force Confederates at Columbus, Kentucky, to stay within their defenses. This would prevent General Leonidas Polk, commanding at Columbus, from reinforcing General Sterling Price’s State Guards in southwestern Missouri. It would also address the growing Confederate threat to Grant’s command. The orders stated that Grant was not to provoke an engagement.

Four days later, Grant supposedly received a dispatch from department headquarters stating that Polk was indeed sending troops down the Mississippi and up the White River to reinforce Price. Grant was to demonstrate against Columbus immediately to prevent the transfer. The dispatch was never found, but Grant later asserted that this prompted him to hurry preparations for the demonstration.

On the 6th, Grant loaded 3,114 troops–five infantry regiments, two cavalry troops, and a six-gun battery–onto four transports escorted by the wooden gunboats U.S.S. Lexington and Tyler. They steamed downriver under cover of growing darkness before stopping for the night on the eastern (Kentucky) bank, about nine miles below Cairo and six miles above the hamlet of Belmont, Missouri.

Polk had about 2,700 Confederates at Belmont under Brigadier General Gideon J. Pillow, with his main force at Columbus. Contrary to Federal concerns, Polk had no plans to reinforce Price; in fact, Pillow had received orders to leave Belmont the next morning and move east to Clarksville, Tennessee. The Confederates at Belmont had no idea that Grant was approaching that evening. Grant ordered General Charles F. Smith, commanding Federals at Paducah, to demonstrate against Columbus while Grant prepared to “menace Belmont.” This would prevent Polk from reinforcing the hamlet.

Around 8 a.m., Grant’s Federals landed at Hunter’s Farm, about three miles above Belmont, concealed by woods. They cut through the dense underbrush as they advanced on the town. Pillow, whose troops had begun heading toward Clarksville, hurried back and formed a line of battle in the face of the oncoming enemy. Confederate artillery from the Columbus bluffs fired on the Federals as they approached and attacked Pillow’s right, anchored on the Mississippi, and center. 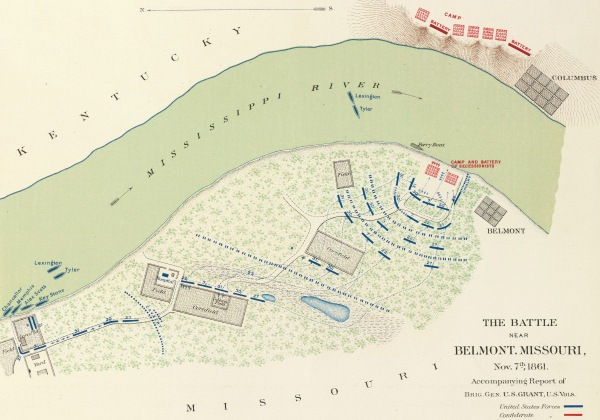 Map of the engagement at Belmont | Image Credit: Wikipedia.org

The Confederates held firm until their ammunition ran low. Pillow ordered a bayonet charge, but only some of the men complied, and their line quickly collapsed. The Confederates fled, leaving the Federals in possession of their abandoned camps. Grant, with no wagons to collect captured supplies, directed that captured soldiers, horses, and cannons be put on the transports while the rest was burned. The Federals looted the camps as they listened to officers delivering patriotic speeches and bands playing “Yankee Doodle.”

Meanwhile, Polk landed reinforcements from Columbus between the Federals and their transports. With their line of retreat cut off, some officers suggested surrender. Grant replied that “we had to cut our way in and could cut our way out just as well.” The Federals fought their way through the enemy forces and hurried back to their transports. Grant nearly rode into enemy lines on his way to the river. The Lexington and Tyler provided covering fire as the troops boarded the vessels and returned north. Grant was the last to board, leaving his dead and wounded behind.

Grant’s men returned to Belmont the next day under a flag of truce to collect the dead and wounded. Some officers’ wives searched for their missing husbands. Grant hosted Polk aboard the Federal headquarters boat, where Grant offered to turn over some wounded Confederate troops that had been captured. Polk responded that “… my Government requires all prisoners to be placed at the disposal of the Secretary of War.”

Confederates considered this engagement a victory because they had driven the Federals off. One reported that Grant “fled the field, virtually abandoning one of his regiments, leaving his dead and wounded, a large preponderance of prisoners, a stand of colors, 1,000 stands of arms, and the caissons of his battery at the hands of the Confederates.”

Pillow reported that his “small Spartan army” had withstood an attack from a force three times its size with impressive gallantry. General Albert Sidney Johnston, commanding the Western Theater, announced:

“This was no ordinary shock of arms; it was a long and trying contest, in which our troops fought by detachments, and always against superior numbers. The 7th of November will fill a bright page in our military annals, and be remembered with gratitude by the sons and daughters of the South.”

Some northerners tended to agree. An editorial in the Chicago Tribune lamented the perceived defeat at Belmont:

“The disastrous termination of the Cairo expedition to Columbus is another severe lesson on the management of this contest with the rebels. Our troops have suffered a bad defeat… The rebels have been elated and emboldened while our troops have been depressed, if not discouraged.”

However, Grant claimed victory because he successfully carried out his orders, even if his force had to flee to narrowly avoid destruction. In his official report, Grant declared, “The victory is complete.”

In reality, this engagement gained nothing for either side. However, the role played by the Lexington and Tyler in protecting the Federal escape demonstrated the importance that naval gunboats would have in future engagements on the western rivers. And despite Grant’s questionable performance, this proved for the first time that he would fight when other generals would not.

3 thoughts on “The Battle of Belmont”