The Fall of Port Royal

November 7, 1861 – After struggling through a horrific storm on the Atlantic, the Federal naval squadron attacked and captured a vital Confederate port. 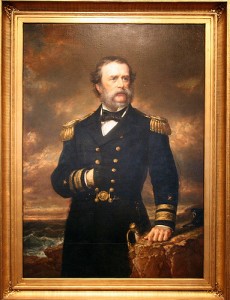 As November opened, Flag Officer Samuel F. Du Pont’s 77-ship Federal armada carrying 13,000 men continued its journey from Fort Monroe to Port Royal Sound. The weather suddenly turned ferocious as the fleet rounded Cape Hatteras, North Carolina, producing what an officer aboard the U.S.S. Wabash called “one of the severest gales I have ever experienced.”

The crew of the Isaac Smith had to dump their artillery to keep from sinking. The transport steamer Governor went under, with the Smith and the U.S.S. Sabine rescuing all but seven of the 300 Marines on board. The U.S.S. Mohican rescued all but 26 from the sinking transport Peerless. Several other vessels foundered, losing large amounts of munitions.

Small steamers to be used for landing troops had to turn back, thus canceling the original plan for army troops to land and seize the two forts protecting the entrance to Port Royal Sound. The navy would have to take Port Royal alone, just like at Hatteras Inlet and Ship Island. For now, Du Pont struggled to reassemble his scattered fleet.

Still unable to sight most of his ships, Du Pont proceeded southward anyway aboard his flagship, the U.S.S. Wabash, and arrived off the bar at Port Royal Sound on the 4th. He was joined by 25 ships of his fleet, with the rest of the surviving vessels on their way.

Port Royal Sound stood halfway between Charleston and Savannah, guarding a rich agricultural region known for producing long-staple cotton. Its defenses included the 600-man garrisons at Fort Beauregard at Bay Point to the north and Fort Walker on Hilton Head to the south; these forts mounted 43 total guns. In addition, a small naval squadron under Commodore Josiah Tatnall consisted of his flagship Savannah and three converted tugboats. Even with 1,000 reinforcements on their way, these defenders were hardly expected to withstand such oncoming Federal power, with or without bad weather.

The Federals surveyed the coast, taking depth readings and identifying the channels the warships could use to enter the sound. Tatnall fired on the U.S.S. Ottawa, Pembina, and Seneca, but superior Federal firepower drove Tatnall’s little fleet back into the harbor under the protection of Forts Beauregard and Walker. The Federal ships were undamaged. The next day, Federal ships continued assembling, with some crossing the bar to test the forts’ strength. Tatnall attacked again and was again forced to withdraw. The Federals then fired on Fort Beauregard, sparking a massive explosion by hitting an artillery caisson.

Du Pont held a council of war that afternoon, where he determined to attack the forts. Without landing craft, the army troops under Brigadier General Thomas W. Sherman could not launch their planned attack and would instead serve to take the forts after the naval forces pounded them into submission. A navy lieutenant wrote, “General Sherman says in my hearing that: ‘These ships can’t take the forts without cooperation with the troops.’ I hope we will show him differently.”

The attack was postponed until the 6th when Du Pont’s flagship became grounded and needed help from the Susquehanna to be freed. The next morning, Du Pont postponed the attack another day because high winds made it “too fresh” to attack.

On the morning of November 7, the flagship Wabash led 14 Federal warships into Port Royal Sound and opened fire on Forts Beauregard and Walker. Du Pont employed a tactic suggested by Flag Captain Charles H. Davis by moving the ships in a large oval pattern while firing. This allowed each ship to bear all her guns on the forts and deprived Confederate artillerists of fixed targets. Most of the inferior Confederate artillery could not reach the attacking ships. Tatnall’s Confederate fleet, too small to intervene, dipped its pennants and fell back up the Beaufort River.

A correspondent witnessing the bombardment reported that “the rising of the dust on shore in perpendicular columns looked as if we had suddenly raised… a grove of poplars.” General Thomas F. Drayton, commanding the Confederate defenses, watched this “magnificent armada… vomit forth its iron hail, with all the spiteful energy of long-suppressed rage and conscious strength.” Drayton’s brother, Percival, commanded the U.S.S. Pocahontas within the attack fleet.

Federal gunboats enfiladed Fort Walker, methodically disabling its guns and firing an average of 60 shells over the defenders per minute. The Confederates in the fort finally began evacuating around 2 p.m., aided by Tatnall’s ships. Fort Beauregard was abandoned 90 minutes later. The Confederates sustained 62 casualties (11 killed, 47 wounded, and four missing). White residents joined them in fleeing from the sea islands to the mainland, leaving behind some 10,000 slaves.

The Wabash landed Marines to take Fort Walker, and army forces took over Fort Beauregard. Commander John Rodgers, acting as Du Pont’s aide, obtained the formal surrender of both forts. At 2:20 p.m., he received the honor of raising the U.S. flag over Fort Walker, the first U.S. flag to be hoisted on South Carolina soil since the state seceded.

General Robert E. Lee arrived from Richmond that evening and conferred with General Roswell S. Ripley, commander of the former Department of South Carolina. The men could do nothing except move their forces farther inland and try strengthening the defenses of Charleston and Savannah. Lee sadly noted, “There are so many points to attack, and so little means to meet them on the water, that there is but little rest.”

The Federals sustained just 31 casualties (eight killed and 23 wounded) in securing the best natural harbor on the Confederate coast. This was the greatest Federal victory of the war to date, and it greatly boosted sagging northern morale.

Federal occupation forces at Port Royal and Hilton Head rounded up the abandoned slaves and put them to work as servants and laborers. They all worked to make the site a prime base for refueling, supplying, and servicing the blockading squadron. It also provided an excellent staging area for an attack on Charleston, one of the Lincoln administration’s prime targets. Du Pont wrote, “It is not my temper to rejoice over fallen foes, but this must be a gloomy night in Charleston.”

Sherman’s troops advanced from Hilton Head toward Beaufort the next morning, as residents of Charleston and Savannah received the tragic news that Port Royal had fallen. Many people packed their belongings and fled inland. Percival Drayton, a former resident of the area, wrote, “Such a panic as seems to have existed through the low country can scarcely be described.”

An editorial in the Charleston Mercury defiantly exclaimed, “Let the invaders come, ‘tis the unanimous feeling of our people. Our Yankee enemies will, sooner or later, learn to their cost the difference between invaders for spoils and power, and defenders of their liberties, their native land.”

On November 9, Sherman’s Federals and gunboats captured Beaufort on the Broad River, effectively cutting off the flow of communications and supplies via water between Charleston and Savannah. Lee wrote to Secretary of War Benjamin from his new headquarters at Coosawhatchie, South Carolina:

“The enemy having complete possession of the water and inland navigation, commands all the islands on the coast and threatens both Savannah and Charleston, and can come in his boats, within 4 miles of this place… We have no guns that can resist their batteries, and have no resources to meet them in the field.”

4 thoughts on “The Fall of Port Royal”