The Second Session of the Thirty-Seventh U.S. Congress

December 2, 1861 – The second session of the first Republican-dominated Congress opened amid growing discontent with the way the Lincoln administration was prosecuting the war. 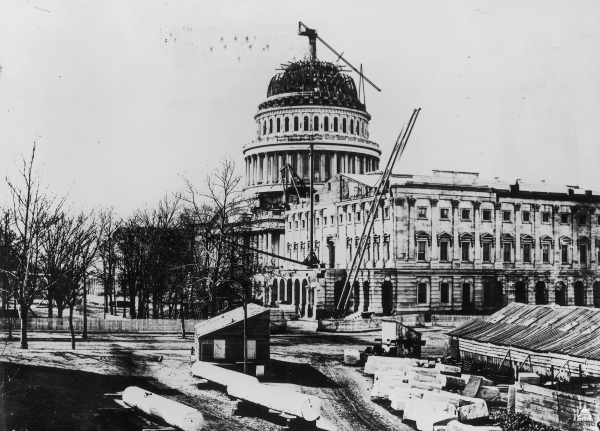 The Republican majority in this Congress included an unprecedented number of New Englanders, most of whom belonged to the party’s Radical faction. Of the 22 Senate committees, 16 were chaired by senators either from New England or born in New England but representing other states. The two most powerful members of the House of Representatives, House Speaker Galusha Grow and Ways and Means Committee Chairman Thaddeus Stevens, represented Pennsylvania but had been born and raised in New England.

Debate quickly focused on more effective means to wage the war. For the Radicals, this meant transforming the conflict from preserving the Union by destroying the Confederacy to destroying the southern way of life by crusading against slavery. This was evidenced by the House rejecting a motion to reaffirm the Crittenden-Johnson Resolution of July 25, which had declared that the war was being waged solely to preserve the Union.

Members of Congress introduced several petitions and bills emancipating slaves, especially those belonging to masters “in rebellion.” Senator Lyman Trumbull of Illinois introduced a bill providing “for the confiscation of the property of rebels, and giving freedom to the persons they hold in slavery.” This would expand the Confiscation Act by seizing and freeing the slaves of anyone supporting the Confederacy (the current act only provided for seizing slaves actively serving the Confederacy and placing them under Federal supervision).

Trumbull had once been a close political ally of President Lincoln, but they had since clashed on the slavery issue, prompting Trumbull to declare that the president lacked “the will necessary in this great emergency.”

Aside from slavery, financing the war dominated debates. It was estimated that by the end of the fiscal year of June 30, 1862, the Federal debt would be $750 million, with only $165 million in revenue generated by taxation. Unprecedented tax increases were proposed, along with other measures such as increasing import tariffs on coffee, tea, sugar, and molasses. More proposals would be forthcoming upon receiving the Treasury Department’s annual report.

Regarding the military, Congress authorized the navy secretary to award the Medal of Honor to enlisted men in the Navy and Marine Corps. Creation of the Medal came about due to pressure from servicemen and the public. This was the highest military award ever granted by the U.S. Congress also approved an official thanks for “the gallant and patriotic services of the late Brig Gen Nathaniel Lyon, and the officers and soldiers under his command at the Battle of Wilson’s Creek.”

In addition, the Senate held a memorial service for Edward D. Baker of Oregon, a fellow senator-turned-colonel, killed at Ball’s Bluff in October. In an unusual occurrence, President Lincoln visited the Senate chamber to attend the service.

Breckinridge, the former U.S. vice president under James Buchanan, had attended the special congressional session the previous summer but had since disavowed the Union and accepted a military commission as a Confederate brigadier general. Senators unanimously voted to expel him from the chamber, 36 to 0.

One thought on “The Second Session of the Thirty-Seventh U.S. Congress”