December 31, 1861 – Major General Thomas J. “Stonewall” Jackson issued orders for his Confederate forces to begin marching on New Year’s Day. Only Jackson knew that they would be embarking on a grueling campaign to capture Romney in Virginia’s Shenandoah Valley. 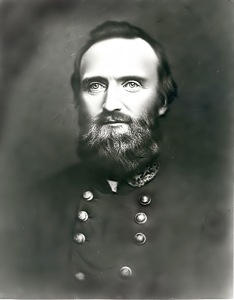 Jackson had submitted a proposal to conduct a campaign against Federal forces in the Valley. The main target was Romney, a village of about 500 residents on the South Branch of the Potomac River, about 40 miles from Jackson’s army at Winchester. Under Jackson’s plan, his men would subsist on the rich farmland between the two towns.

Secretary of War Judah P. Benjamin informed him on December 6 that he would be reinforced by General William W. Loring’s Confederate Army of the Northwest, stationed in western Virginia, as requested. Benjamin wrote that this “will place at your disposal quite an effective force for your proposed campaign, although I regret to observe that his movement cannot be made as promptly as I had hoped.”

Benjamin also warned Jackson that Federals stationed at Frederick, Maryland, and Romney may join forces to attack him at Winchester. If that happened, Benjamin stated that Loring’s arrival should allow Jackson to “turn the tables handsomely on the enemy by anticipating his purpose.”

As Jackson waited for Loring’s men to arrive, he dispatched a force of 400 infantry and two sections of the Rockbridge Artillery under Major Frank Paxton to destroy Dam No. 5. Located six miles north of Williamsport, Maryland, the dam was a reservoir for the Chesapeake & Ohio Canal. Paxton’s men tried firing their cannon at the dam on Sunday the 8th, but Federals drove them off. Margaret J. Preston, the wife of one of Jackson’s staff officers, said, “The expedition proved a failure, and he (Jackson) attributed it in some measure to the fact that Sunday had been needlessly trespassed upon.”

A little over a week later, Jackson led troops on another mission to destroy the dam. They marched 15 miles from Winchester to Martinsburg, then another 13 miles to the bluffs overlooking the C & O Canal, which ran parallel to the Potomac. The men had been directed to leave their baggage at Big Springs, and despite the freezing weather, they waited all day before 30 troops moved out under cover of darkness to begin the destruction.

Federal forces noticed the Confederates at daylight on the 18th and began firing on them. Jackson brought up artillery, but so did the Federals, and Jackson suspended operations. After waiting another day, Jackson moved some of his troops up the Potomac to trick the Federals into thinking they were going to destroy Dam No. 4. When the Federals pursued, the Confederates hurried back and resumed their destruction of Dam No. 5. They returned to their Winchester camps on December 23 after a tortuously freezing two-day march.

The next day, Jackson received word that there were now 10,000 Federals at Romney. He wrote to his superior, General Joseph E. Johnston:

“As yet General Loring has not arrived, and as he has not reported to me the strength of his command I am unable to give it, except by estimate based upon the number of his regiments. I would respectfully urge upon the commanding general of the department the importance of sending me at once 5,000 good infantry and the First Virginia Cavalry, or its equivalent, and also a battery of four guns.”

Jackson would return the men “after the Federal forces shall have been captured or driven out of Hampshire County.”

Loring arrived at Winchester later that day and informed Jackson that Benjamin had “left it optional with him (Loring) whether to bring his troops from the Monterey line or not, and he has decided not to bring any more of these troops here.” Jackson resolved to attack the Federals at Romney “at the earliest practicable moment” before their force grew any larger. This decision did not change even after Johnston told Jackson that he could send him no reinforcements, as it was “of greater consequence to hold this point (Manassas Junction).”

By New Year’s Eve, Jackson had 11,000 men under his command, including three of Loring’s four brigades. Loring was Jackson’s second-in-command while retaining direct command over his army. Only Jackson and his superiors knew that he would be advancing on Romney. Johnston had approved Jackson’s written plan to capture Romney and prevent Federal forces at that village and Martinsburg from linking. But Jackson did not write that he intended to first destroy the Federal outposts at Bath and Hancock, on the Virginia and Maryland sides of the Potomac respectively. This would prevent the Federals from sending reinforcements from Martinsburg while Jackson turned on Romney.

Jackson issued the marching orders. The men were to receive five days’ rations, wake at 3 a.m., eat their breakfast and begin marching at 6 a.m. All men were to carry three-inch-wide white bands to wrap around their hats so they could be identified in combat. The new year would begin a new campaign.

One thought on “The Romney Campaign”