January 16, 1862 – Major General Thomas J. “Stonewall” Jackson’s Confederates seized the objective of their campaign in Virginia’s Shenandoah Valley, though not in the way they had intended. 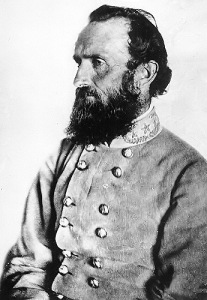 Jackson’s troops reached Unger’s Store on the night of January 7 and spent the next couple days trying to recover from the extreme cold. The army had a very long sick list; one of Brigadier General William W. Loring’s brigade commanders reported that 500 men were ill, and another brigade reported 300. Jackson directed the men to heat water for baths and refit the horses with ice calks.

Brigadier General Frederick Lander, commanding the Federals at Hancock, Maryland, requested permission from Major General Nathaniel P. Banks to pursue Jackson. Banks refused, citing the frigid weather. Lander then bypassed Banks to ask General-in-Chief George B. McClellan, who also refused. McClellan stated through Banks: “Say to General Lander that I might comment very severely on the tone of his dispatches but abstain…” Banks was to direct Lander “to repair at once to Romney and carry out the instructions I have sent already to fall back on the railway.”

Lander resentfully complied, arriving at Romney on January 9 and joining forces with those under Brigadier General Benjamin F. Kelley. Lander urged Kelley to take the offensive against Jackson, but Kelley declined, citing overwhelming Confederate numbers closing in on them. Thwarted again in his effort to fight, Lander angrily withdrew the 7,000 Federals from Romney on the night of the 10th. Falling back in freezing rain, Lander exclaimed, “The next time I undertake to move an army, and God almighty sends such a rain, I will go around and cross hell on the ice!” The Federals withdrew to Patterson’s Creek Station, six miles east of Cumberland, Maryland.

Jackson’s march on Romney did not resume until January 13, when the troops left Unger’s Store, 40 miles away. Cavalry reported that the Federals had abandoned the village after wildly overestimating Jackson’s strength. The morning was sunny and mild, but temperatures soon plummeted and a storm developed late that afternoon. Loring’s Army of the Northwest struggled to keep pace with the Stonewall Brigade.

Jackson’s advance elements arrived outside Romney on the night of the 14th in driving sleet. A soldier said that when they arrived, “every soldier’s clothing was a solid cake of ice,” with “icicles two inches long hanging from the hair and whiskers of every man.” Loring’s men were still on their way, as tensions between Jackson and Loring continued mounting.

By January 16, the entire army had arrived to occupy Romney. Most residents had abandoned the town, with the Stonewall Brigade taking up quarters in churches, private homes, and the courthouse. Loring’s men, resentful of Jackson’s hard push through terrible weather, hissed and jeered him as he rode past. Overall, Jackson’s campaign that had begun on New Year’s Day was lackluster at best. He had taken Romney as planned, but he had failed to subdue Hancock first, thereby only partially accomplishing the mission. The weather had also taken an unforeseen toll on the army.

Jackson reported to Richmond that the Romney area was back under Confederate control, having sustained just 32 casualties (four killed and 28 wounded) during the campaign. This did not include the hundreds suffering from frostbite, hypothermia, and other weather-related illnesses. He requested 4,000 reinforcements to defeat Lander and Kelley and capture Cumberland, a vital supply depot on the Baltimore & Ohio Railroad. As his men suffered, Jackson planned to send them on another attack.