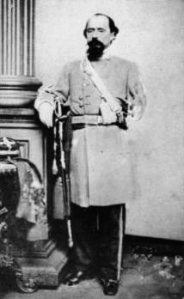 On the day after occupying Romney, Jackson planned to attack the vital Federal supply depot at Cumberland, Maryland. However, the bitterly cold weather had taken its toll on the troops; one unit reported that only 15 men could walk. In addition, Secretary of War Judah P. Benjamin denied Jackson’s request for reinforcements. Thus, Jackson suspended the assault and reluctantly issued orders to go into winter quarters.

Part of Jackson’s army would be stationed at Bath and Moorefield to defend against the Federals across the Potomac River at Hancock. Loring’s Army of the Northwest would stay at Romney to guard the South Branch Valley. Jackson would lead General Richard “Dick” Garnett’s Stonewall Brigade back to Winchester, the campaign’s starting point, 30 miles east-southeast.

Jackson accompanied the Stonewall Brigade out of Romney on January 21, arriving back at Winchester two days later. Loring resented Jackson for leaving him and his men at Romney, which they described as a “pig pen.” A Virginia private wrote that the village looked “very much as if it had been visited by an earthquake and pretty well shaken to pieces.” Another private wrote his wife, “I have not changed clothes for two weeks… I am afraid the dirt is sticking in, as I am somewhat afflicted with the baby’s complaint–a pain under the apron.”

In addition, Loring thought that Romney had no strategic value, and leaving his depleted force there made them vulnerable to an attack by Federals just 20 miles away. Colonel Samuel V. Fulkerson of the 37th Virginia in Loring’s army wrote to two Virginia congressmen complaining about their “terrible exposure since leaving Winchester,” and informing them that their “emaciated force” had become “almost a skeleton.”

Fulkerson asserted that Romney was worthless because “the country around it has been exhausted by the enemy, and its proximity to the enemy and the Baltimore and Ohio Railroad will wear us away (already greatly reduced) by heavy picket and guard duty.” He also contended that had the army been returned to Winchester, they would have gained at least 500 new recruits. Fulkerson’s brigade commander, General William Taliaferro, endorsed the letter.

A group of officers and soldiers petitioned Jackson to pull them out of Romney: “Instead of finding, as expected, a little repose during midwinter, we are ordered to remain at this place. Our position at and near Romney is one of the most disagreeable and unfavorable that could well be imagined.” Jackson sent the petition to Richmond after adding a remark: “Respectfully forwarded, but disapproved.”

Meanwhile, Taliaferro and Fulkerson presented their letter to Loring and asked him to “present the condition of your command to the War Department, and earnestly ask that it may be ordered to some more favorable position.” They hoped that Loring’s appeal to the top of President Jefferson Davis’s administration would make a bigger impact than Fulkerson contacting members of Congress.

Loring agreed, sending the protest to Secretary of War Benjamin and adding, “I am most anxious to re-enlist this fine army, equal to any I ever saw, and am satisfied if something is not done to relieve it, it will be found impossible to induce the army to do so, but with some regard for its comfort, a large portion, if not the whole, may be prevailed upon.” Loring also dispatched Taliaferro to personally deliver the same letter to Davis.

By this time, rumors were already circulating around Richmond about dissension in Jackson’s ranks. Benjamin wrote to General Joseph E. Johnston, Jackson’s superior: “The accounts which have reached us of the condition of the army in the Valley District fill us with apprehension.” Benjamin asked Johnston to “take such measures as you think prudent under the circumstances, and report to the Department whether any measures are necessary on its part to restore the efficiency of that army, said to be seriously impaired.”

In the meantime, Loring directed a survey of the Romney vicinity by Seth M. Barton, one of Jackson’s engineers. Loring reported that Barton had found the area “indefensible,” writing to Richmond:

“If it is the intention to keep this command here, I am compelled to say that the force is not equal to the requirements, and I therefore respectfully but earnestly request a re-enforcement of 3,000 men to meet the immediate concentration of the enemy as well as to relieve the command of the unparalleled exposure to which they have been and are now subjected.”

The Davis administration would soon address this controversial affair and cause an even greater controversy.

One thought on “The Romney Campaign: Confederates Protest Jackson”