February 15, 1862 – The Confederates tried breaking out of the Federal grip around Fort Donelson before deciding on whether to surrender.

Brigadier General Ulysses S. Grant, commanding the Federal troops surrounding Fort Donelson, met with Flag Officer Andrew H. Foote, commanding the naval flotilla that had been severely damaged in the aborted attack on the fort the previous day. Foote, nursing his wound from that engagement, informed Grant that the gunboats would have to return to Mound City for repairs. This left Grant to place Fort Donelson under siege. However, the siege plans changed when the Confederates attacked on the morning of the 15th.

At 5 a.m., Brigadier General Gideon Pillow assembled his Confederates for their attempt to break through the southern part of the Federal line around Fort Donelson and escape to Nashville. Colonel Nathan Bedford Forrest’s cavalry troopers began the action by skirmishing with the Federal pickets in the northern sector to divert Federal attention from Pillow’s impending assault to the south.

Pillow’s advance began in full force around 7 a.m., aided by Confederates under Brigadier General Simon B. Buckner. The Federals blocking them were commanded by Brigadier General John A. McClernand. Fighting soon raged all around the Wynn’s Ferry road leading directly to Nashville.

After several hours of hard combat, the breakout appeared successful. McClernand had been pushed back nearly a mile, and the road to Nashville was open for the Confederates to take. Both Pillow and the overall commander, Brigadier General John B. Floyd, telegraphed General Albert Sidney Johnston, commanding the Confederate Western Theater, that they had won a great victory.

Grant, hearing the gunfire, hurried back from the river to prepare for a counterattack. He told his officers: “The position on the right (south) must be retaken. Some of our men are pretty badly demoralized, but the enemy must be more so, for he has attempted to force his way out, but has fallen back; the one who attacks first now will be victorious and the enemy will have to be in a hurry if he gets ahead of me.”

Grant was correct–the enemy had indeed “fallen back” as the Confederate victory began turning sour. Buckner’s diversionary attack on the Federal left had been stopped cold, and the commanders had not decided on whether to immediately escape or fall back and regroup before taking the road to Nashville. Pillow chose the latter, ordering a withdrawal back to the trenches. 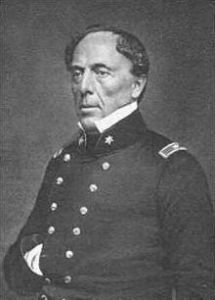 Buckner protested to Floyd, who had ordered Buckner’s men to hold the road so the rest of the army could escape. Floyd went to Pillow and demanded an explanation for the withdrawal. Pillow convinced him that the road would stay open long enough to reorganize. Floyd changed his mind and sided with Pillow.

When the fighting ended for the day, both sides held roughly the same positions they did before the battle began, but they had suffered a combined 4,000 casualties (1,000 killed and 3,000 wounded). Mary Ann “Mother” Bickerdyke tended to the cold, wounded men left lying on the battlefield and gained fame for her role in caring for Federal troops.

That evening, the Confederate commanders held a council of war at the Dover Inn. Their troops had been in their trenches for several days, exposed not only to enemy fire but the brutal rain, sleet, wind, and cold. Floyd began discussing plans to take the road to Nashville the next morning, but those plans were dashed by reports that the Federals had regained all their lost ground.

Pillow and Buckner blamed each other for failing to capitalize on the initial Confederate success that morning. Colonel Forrest, who had two horses shot out from under him in the fighting, argued that a path to escape was still open on the extreme Federal right, along the river. However, the army surgeon warned that a nighttime escape attempt could cause many deaths from exposure to the extreme cold.

Buckner urged surrender, saying, “It would be wrong to subject the army to a virtual massacre when no good would come from the sacrifice.” Pillow wanted to try another breakout, but Floyd and Buckner asserted that it could cost them three-fourths of their men, and they were not willing to sacrifice that many just to save the remaining fourth.

The three commanders finally agreed that surrender was the only option. However, Floyd and Pillow had become generals mostly due to their political careers, and as such, neither wanted to surrender personally. In particular, Floyd feared that Federal authorities might punish him for arms deals he had allegedly made with southern states as U.S. secretary of war in late 1860.

Floyd asked Pillow, his second-in-command, if he would surrender the fort if Floyd passed command to him. Pillow declined; he had vowed never to surrender and insisted that breaking his pledge would demoralize the Confederacy. Buckner said that he would surrender if the command was passed to him, if only to avoid further bloodshed without hope of victory. The men may have also thought that Buckner might get better terms from Grant, who was his friend before the war.

Floyd asked, “General Buckner, if I place you in command, will you allow me to get out as much of my brigade as I can?” Buckner said, “I will, provided you do so before the enemy receives my proposition for capitulation.” In accordance with military protocol, Floyd motioned to Pillow and said, “I turn over my command, sir.” Pillow said, “I pass it.” Buckner said, “I assume it. Give me pen, ink and paper, and send for a bugler (to sound the parley).”

This deal was unacceptable to Forrest, who declared, “I did not come here for the purpose of surrendering my command.” Pillow advised him to “Cut your way out,” and Buckner authorized Forrest to try escaping. Forrest took the route he had noted on the extreme right, leading his 700 cavalry troopers along a narrow path through a freezing swamp and snowy woods to Nashville.

On the early morning of the 16th, Floyd and Pillow slipped out of Fort Donelson, rowing across the Cumberland River under cover of freezing darkness with about 2,500 of their men.

One thought on “Fort Donelson: The Confederate Breakout”