The Siege of Yorktown: Johnston Prepares to Retreat 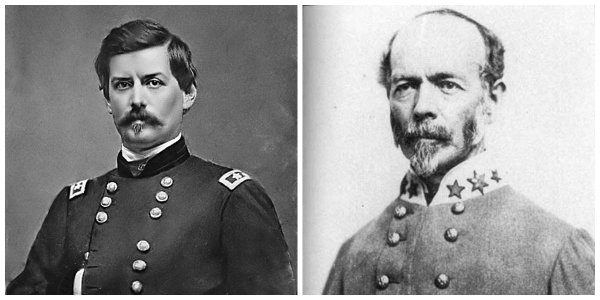 By May 1, McClellan had 70 heavy guns in place to bombard the Confederate works on the Virginia Peninsula between the York and James rivers. Johnston, commanding the Confederate defenders at Yorktown, informed President Jefferson Davis that he planned to abandon the town the following evening. Davis replied:

“Accepting your conclusion that you must soon retire, arrangements are commenced for the abandonment of the navy-yard and removal of public property both from Norfolk and Peninsula. Your announcement to-day that you would withdraw to-morrow night takes us by surprise, and must involve enormous losses, including unfinished gunboats. Will the safety of your army allow more time?”

Davis then sent Secretary of War George W. Randolph and Navy Secretary Stephen R. Mallory to assess the situations at Yorktown and Norfolk to see if Johnston’s evacuation could be delayed.

At Yorktown, the Confederates continued trying to improve their defenses even as Johnston planned to pull out. Major General John B. Magruder, commanding a division in Johnston’s army, issued a proclamation asking locals to volunteer their slaves for digging trenches and building works:

“Under these circumstances, I am sure that no patriotic citizen, with the issue truly at heart, would hesitate to respond most cheerfully to the call which I now make, viz, one negro man, with his ax or spade, to be furnished at once by each proprietor.”

Magruder also addressed charges that the slaves already in the army were being worked too hard: “It is quite true that much hardship has been endured by the negroes in the recent prosecution of the defensive works on our lines, but this has been unavoidable, owing to the constant and long-continued wet weather.”

Magruder argued that the soldiers “have been more exposed and have suffered far more than the slaves,” who “have always slept under cover and have had fires to make them comfortable, whilst the men have been working in the rain, have stood in the trenches and rifle pits in mud and water almost knee-deep, without shelter, fire, or sufficient food.” There had been “sickness among the soldiers and the slaves, but far more among the former than the latter.”

Johnston backed Magruder’s request for more slave labor by asking the Confederate government at Richmond for another 800 slaves, which “can be returned when others are sent in their place.” But Richmond had none to give, as General Robert E. Lee, President Davis’s top military advisor, asked Johnston for “a portion of your negro force” to help build defenses along the James River.

On the Federal side, with McClellan having 70 guns and asking Washington for even more, President Abraham Lincoln sent a troubled response: “Your call for Parrott guns… alarms me–chiefly because it argues indefinite procrastination. Is anything to be done?” McClellan replied, “All is being done that human labor can accomplish.”

Lincoln had allowed McClellan to embark on the Peninsula campaign with the expectation that it would end the war faster than advancing on Richmond from northern Virginia. But McClellan’s request for more guns meant that he was settling in for a siege, which could last indefinitely depending on Confederate resistance. In addition, sending more guns to the Peninsula meant that there would be fewer guns to defend Washington.

By this time, McClellan had about 112,000 Federals on the Peninsula, or nearly double Johnston’s 57,000 Confederates. However, McClellan’s intelligence sources estimated Johnston to have about 100,000 men behind strong defenses, ready to repel any head-on assault. Thus, McClellan relied on his artillery, confident that the Federals’ superior firepower would tip the scales in his favor.

Once the Federal guns were in place, they could hurl 7,000 pounds of shell in every combined volley. But rather than begin firing each gun as it was emplaced, McClellan opted to wait until all the guns were emplaced before beginning his bombardment. And extensive construction was required to build roads, structures, and platforms sturdy enough to transport, house, and fire the heavy guns.

As the Federals continued preparing their siege, Randolph and Mallory arrived at Norfolk. Learning that Johnston had ordered Major General Benjamin Huger, commanding the Confederates there, to abandon the town and the vital navy yard, Randolph postponed the order “until he (Huger) could remove such stores, munitions, and arms as could be carried off.” Mallory issued similar orders to the navy commandant at Norfolk.

Johnston received orders to postpone his evacuation from the Peninsula until May 3. Lee explained that the Confederates needed more time to evacuate Norfolk and save the naval fleet there. By that date, McClellan had 114 siege guns facing Johnston at Yorktown, along with another 300 smaller field guns. Not only was Johnston faced with overwhelming firepower on the Peninsula, but another Federal army on the Rappahannock River threatened him from the north.

As McClellan planned to begin the great bombardment on May 4, Johnston spent the 3rd trying to disengage from the Federal Army of the Potomac just a few hundred yards in his front. Even though the Confederates lacked adequate transportation for their guns and equipment, Johnston instructed General D.H. Hill, commanding the Confederate left, “Nothing but an actual attack of columns of infantry need interfere with the movement of your main body soon after dark.”

Johnston planned to fall back to Williamsburg, Virginia’s colonial capital, 12 miles west of Yorktown. McClellan was informed of Johnston’s movement by fugitive slaves, but he refused to believe that the Confederates would retreat. His refusal was partly based on a report from his intelligence chief, Allan Pinkerton, stating that accounts from “spies, contrabands, deserters, refugees, and prisoners of war” provided a medium estimate of 100 to 120,000 Confederates in Johnston’s army. Of this, it could “safely be assumed that the medium estimates stated are under rather than over the mark of the real strength of rebel forces at Yorktown.”

McClellan responded by calling up his reserves and requesting the navy to send gunboats up the York River to destroy the Confederate batteries and bombard their defenses from the rear. Before the Federals could act, the Confederates opened a heavy bombardment of their own to hide their evacuation of the Yorktown-Warwick River line.

The Confederates withdrew in two columns, slowly moving through the night until all the defenses were abandoned by morning. They escaped McClellan’s grand bombardment by a day. The fact that the Confederates had held Yorktown for over a month in the face of such overwhelming enemy numbers was amazing in itself. Since McClellan had been unable to unleash his heavy artillery, in a sense the siege of Yorktown ended before it truly ever began.

One thought on “The Siege of Yorktown: Johnston Prepares to Retreat”