The Battle of Perryville

On October 7, part of Bragg’s divided force gathered on the ridge of Chaplin Hills east of Doctor’s Creek, near the small crossroads town of Perryville. Major General William J. Hardee, commanding Confederates in the area, requested reinforcements to drive off what he thought were Federal skirmishers. Neither he nor Bragg knew that 55,000 of Buell’s Federals were closing in on him.

Major General Leonidas Polk arrived with reinforcements that evening, but the Confederates still had just 16,000 men. The rest of Bragg’s army awaited a Federal attack near Frankfort that would never come. Polk took command from Hardee and held a council of war with his top officers before dawn on the 8th. They realized they faced a much larger Federal force than initially believed, so they agreed to stay on the defensive and let the Federals make the first move.

As the Federals advanced on the 8th, a lead brigade under Brigadier General Philip Sheridan encountered Confederates guarding Doctor’s Creek. Sheridan had hoped to get water for his thirsty men during the hot autumn drought. Buell issued orders for the Federals to attack at 10 a.m., but messengers experienced delays in delivering the orders to the commanders on the field.

On the Confederate side, Bragg arrived on the field at 10 a.m. and ordered an attack on the Federal left, despite being outnumbered. Around that time, Federal Brigadier General Charles Gilbert’s III Corps moved up to support Sheridan in the center of the Federal line. An hour later, Major General Thomas C. Crittenden’s II Corps arrived on Gilbert’s right, and then Major General Alexander McCook’s I Corps deployed to Gilbert’s left around noon. Fighting began soon after.

After an artillery duel, Confederates led by Major Generals Benjamin F. Cheatham and Simon B. Buckner crossed the shallow Chaplin River north of Perryville and attacked the Federal left under McCook around 2 p.m. The Confederates expected to strike the enemy’s open flank, but by this time the Federals had extended their line so the Confederates were actually assaulting the enemy center. 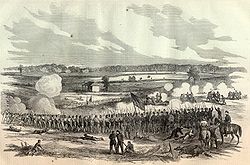 Ferocious combat ensued as the momentum shifted back and forth. The Federals’ top artillerist, Brigadier General William R. Terrill, was mortally wounded by a Confederate shell that exploded overhead. Many of the inexperienced Federal troops in this sector fled from their attackers, with some running over a mile. The Federals finally established strong positions atop a ridge and behind a stone wall, where they repelled three desperate Confederate charges.

“The guns were discharged so rapidly that it seemed the earth itself was in a volcanic uproar. The iron storm passed through our ranks, mangling and tearing men to pieces. The very air seemed full of stifling smoke and fire, which seemed the very pit of hell, peopled by contending demons.”

An atmospheric phenomenon called an “acoustic shadow” prevented Buell from hearing the battle, so he remained at his headquarters several miles in the Federal rear. When messengers finally brought him news of the fight, he rode to the front around 4 p.m. Buell committed less than 30,000 men to the battle, thus negating the Confederates’ numerical disadvantage.

Sheridan’s men under Gilbert helped stabilize the Federal center and drive the Confederates into Perryville. But Federal reinforcements did not arrive to help McCook until late in the day. Fighting ended around nightfall. Some of Buell’s subordinates urged a nighttime counterattack under the bright moonlight, but Buell decided to wait and renew the fight in the morning.

The Federals sustained 4,211 casualties (845 killed, 2,851 wounded, and 515 missing) out of about 27,000 combatants. The Confederates lost 3,405 (519 killed, 2,635 wounded, and 251 missing) from roughly 16,000. The Federals suffered more casualties, including two brigadier generals killed, but the Confederates suffered greater in proportion to the size of their force.

Bragg won a tactical victory, but only because Buell did not use his full strength. In addition to growing supply shortages, Bragg’s Confederates now had the burden of caring for thousands of wounded comrades. Bragg consulted with Polk and Hardee and, realizing he faced superior numbers, decided to withdraw.

Before dawn on the 9th, Bragg issued orders to fall back to Harrodsburg, with General Joseph Wheeler’s cavalry protecting the retreat. Moving to Harrodsburg would prevent Buell from trapping the Confederates in Kentucky. The Federals advanced to renew the fight that morning but soon discovered the Confederates were gone.

Perryville featured missed opportunities on both sides. Buell missed a key opportunity to destroy Bragg’s smaller army, and Bragg missed a chance to win a decisive victory in Kentucky that could have attracted more recruits to the Confederate cause.

5 thoughts on “The Battle of Perryville”