Johnston and the Army of Tennessee 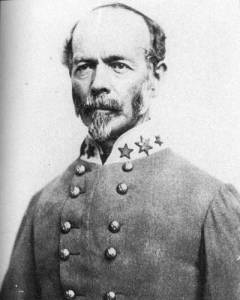 Johnston, commanding all Confederate forces between the Alleghenies and the Mississippi River, had gone to Tullahoma to investigate rumors that officers and men of the Army of Tennessee had lost confidence in their commander, General Braxton Bragg. Johnston arrived in late January and inspected the 42,000-man force for a week before sending his findings to Davis.

Johnston reported that even though “incessant rain has permitted me to see but a fourth of the troops as of yet,” they were generally “in high spirits, and as ready as ever for fight.” Johnston found the troops “well clothed, healthy, and in good spirits,” which was “positive evidence of General Bragg’s capacity to command…”

Any lack of confidence in Bragg had been restored and “confirmed by his recent operations, which, in my opinion, evince great vigor and skill. It would be very unfortunate to remove him at this juncture, when he has just earned, if not won, the gratitude of the country.”

In closing, Johnston advised Davis that if he still insisted on removing Bragg, he should not replace Bragg with anyone who took part in the inspection. This was intended to deflect the possibility that Davis might replace Bragg with Johnston. Johnston resented his role as Western Theater commander and wanted to return to field command, but he considered it an affront to his “personal honor” to replace Bragg. Johnston still privately hoped to regain command of the Army of Northern Virginia, but Robert E. Lee’s performance assured him that he would not get that back.

When Davis received the report, he still had doubts about Bragg’s leadership, and he still leaned toward replacing him with Johnston. However, Johnston made it clear that he would not accept such an assignment. On the 19th, Davis tried convincing him once again that the army officers’ dissatisfaction with Bragg would eventually filter down to the troops.

“It is not given to all men of ability to excite enthusiasm and to win affection of their troops,” Davis wrote, “and it is only the few who are thus endowed who can overcome the distrust and alienation of their principal officers.” If Bragg knew that he did more harm than good by staying on as army commander, he “would surrender a desirable position to promote the public interest…”

Davis complimented Bragg’s “confidence… and zeal,” and then told Johnston, “You limit the selection (of a new commander) to a new man, and, in terms very embarrassing to me, object to being yourself the immediate commander. I had felt the importance of keeping you free to pass from army to army in your department, so as to be present wherever most needed, and to command in person wherever present.” Davis continued:

“When you went to Tullahoma, I considered your arrival placed you for as long a period as you should remain there in the immediate command of that army, and that your judgment would determine the duration of your stay. I do not think that your personal honor is involved, as you could have nothing to gain by the removal of General Bragg. You shall not be urged by me to any course which would wound your sensibility or views of professional propriety, though you will perceive how small is the field of selection if a new man is to be sought whose rank is superior to that of the lieutenant-generals now in Tennessee.”

For now, Johnston refused to be Bragg’s replacement, so Bragg remained in charge of the Army of Tennessee as it remained in winter quarters at Tullahoma.

One thought on “Johnston and the Army of Tennessee”