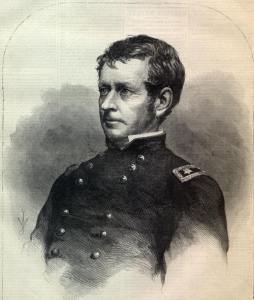 Hooker had relied on Major General George Stoneman’s cavalry to initiate his grand plan of attack. When Stoneman’s excursion failed, Lincoln felt compelled to visit Hooker in person to discuss future strategy. On the night of the 18th, Stanton wrote Hooker, “The President will leave here for Aquia to see you to-morrow morning at 7 o’clock, expecting to reach there about 10 a. m. Can you meet him there?”

Lincoln left as planned, joined by Stanton and Halleck. Lincoln did not tell anyone where he was going; all his secretary John Hay knew was, as he wrote to fellow secretary John Nicolay (currently in North Carolina), that the “President and the Secretary of War went off on a reconnaissance yesterday, I suppose to Aquia Creek, but returned in the evening. What they did or saw has not transpired.”

At the meeting, Hooker explained that Stoneman was still in a good position to disrupt Confederate communication and supply lines, so all was not lost. Lincoln noted that Lee had detached part of one corps under Lieutenant General James Longstreet to take Suffolk, leaving his army with 15,000 fewer men. Lincoln wanted Hooker to attack before those men returned.

Stanton offered to give Hooker authority over Major General John A. Dix, commanding the department over Suffolk, so Hooker and Dix could coordinate their movements. Hooker declined. When Halleck asked where Dix’s troops should be placed to best help Hooker, Hooker said they should remain at Suffolk to prevent Longstreet from returning to Lee.

Hooker then modified his original plan by transferring the task of moving around Lee’s flank from Stoneman’s cavalry to the infantry. The Federals would begin moving as soon as the rains stopped and the river level lowered. Lincoln and his advisors returned to Washington that night.

Meanwhile, Major General John J. Peck, commanding the Federal garrison at Suffolk (within Dix’s department), urged Hooker to do something to force Longstreet to lift his siege of the city. But Hooker wanted Longstreet to stay put so he could not reinforce Lee. When Peck asked Hooker to hurry along with his plan, Hooker replied, “You must be patient with me. I must play with these devils before I can spring. Remember that my army is at the bottom of a well, and the enemy holds the top.”

Two days passed, and still neither Stoneman nor the infantry could cross the flooded Rappahannock River. Hooker wrote Lincoln about Stoneman’s unsuccessful excursion:

“His failure to accomplish speedily the objects of his expedition is a source of deep regret to me, but I can find nothing in his conduct of it requiring my animadversion or censure. We cannot control the elements. I do not regard him out of position. We have no reason to suppose that the enemy have any knowledge of the design of General Stoneman’s movement.”

Hooker added, “The weather appears to continue averse to the execution of my plans as first formed. I feel that I must modify them to conform to the condition of things as they are.” Hooker had been “attached to the movement as first projected, as it promised unusual success.” An alternate plan would also “secure us success, but not to so great an extent…”

Hooker wrote, “As I can only cross the river by stratagem, it may be a few days before I make it.” He planned to advance from several different points “and be in readiness to spring when a suitable opportunity presents itself.” His clear initial plan had now become a vague alternate plan.

On the Confederate side, Lee reported to Secretary of War James A. Seddon that his men were surviving on just a quarter-pound of meat and a pound of flour per day, and a tenth of a pound of rice two or three times per week. Scurvy and typhoid were afflicting the men as a result. Lee himself was ailing physically; he contracted a severe throat infection, and sharp pains in his arm, chest, and back may have led to a heart attack.

Seddon had asked Lee to send Longstreet to reinforce the Army of Tennessee at Tullahoma. This would enable General Joseph E. Johnston, commanding the Confederate Western Department, to better defend against the advancing Federals. It could also divert Federal attention from General P.G.T. Beauregard’s Confederates at Charleston Harbor. Lee proposed a different idea:

“Should Hooker’s army assume the defensive, the readiest method of relieving the pressure upon General Johnston and General Beauregard would be for the army (of Northern Virginia) to cross into Maryland. This cannot be done, however, in the present condition of the roads, nor unless I can obtain a certain amount of provisions and transportation. But this is what I would recommend, if practicable.”

Confederate scouts reported Hooker’s movements, but Lee could not guess his true intentions. The Federals had sent out a fake message that Stoneman was headed for the Shenandoah Valley, and while Lee believed it, Major General Jeb Stuart (commanding the Confederate cavalry) thought it was just a diversion from a main attack elsewhere. Lee correctly guessed that Hooker was trying to get the Confederates out of their entrenchments and expose Fredericksburg.

Responding to rumors that Hooker might try moving up the Virginia Peninsula as George B. McClellan had done last year, Lee wrote President Jefferson Davis, “I do not think General Hooker will venture to uncover Washington City, by transferring his army to James River.” However, “Owing to the condition of our horses and the scarcity of forage and provisions,” the Army of Northern Virginia could not take the offensive.

Even so, Lee stated it was “all-important that we should assume the aggressive by the 1st of May, when we may expect General Hooker’s army to be weakened by the expiration of the term of service of many of his regiments, and before new recruits can be received.” Davis granted Lee permission to pull cavalry from western Virginia and North Carolina to counter Stoneman’s threat to his flank on the Rappahannock.