The Battle of Chancellorsville: Jackson Attacks

Hooker placed three corps in the center because he expected the bulk of General Robert E. Lee’s Confederate Army of Northern Virginia to attack there. 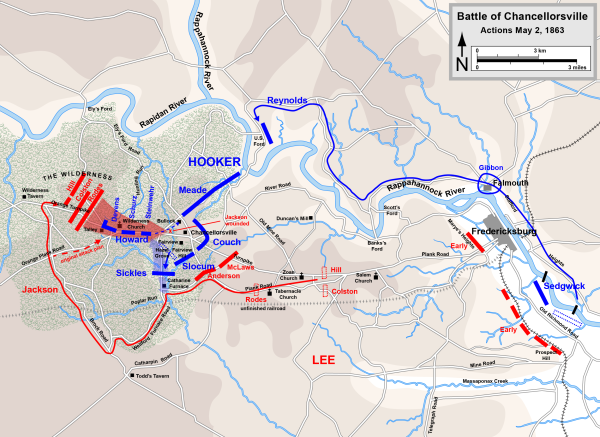 Movements on May 2 | Image Credit: Wikimedia.org

A movement across an enemy’s front was one of the most hazardous maneuvers in warfare because it left his long column highly vulnerable to easy attack. Hooker could have destroyed Lee in his front, Early at Fredericksburg, or Jackson moving toward his right if he attacked any of these three forces with superior numbers. But Hooker, whose cavalry was wrapping up its failed raid instead of providing intelligence, chose not to do so, just as Lee hoped.

Although Jackson tried moving undetected, Sickles’s Federals observed the enemy column’s rear and fired on it through a clearing. After an hour, Sickles reported that the Confederates “hurried past in great confusion, vainly endeavoring to escape our well-directed and destructive fire.” But Sickles did not try to find out where the Confederates were going.

After inspecting his forces and receiving reports of Sickles’s supposed victory, Hooker determined that the Confederates were retreating. Even so, he alerted Howard to stay on guard to the right. Hooker wrote, “We have good reason to suppose that the enemy is moving to our right. Please advance your pickets for purposes of observation as far as may be safe in order to obtain timely information of their approach.” Howard answered, “I am taking measures to resist an attack from the west.”

Hooker then directed the 40,000 Federals outside Fredericksburg under Major General John Sedgwick to push west through Early’s defenders at Fredericksburg and join the main army. Hooker planned to pursue Lee, whom he thought was now in full retreat. Since Hooker’s orders to attack Early were discretionary, Sedgwick chose not to follow them.

Meanwhile, Sickles continued receiving word that Confederates were moving around to the Federal right, and he asked Hooker for permission to attack. Hooker finally complied in early afternoon, but he only permitted a probing action, not a full-scale assault. Sickles’s men moved up from Hazel Grove to hit the rear of the Confederate column near Catharine Furnace; they took several hundred prisoners before the Confederates repelled the attack and resumed their march.

When Sickles received word that the Confederates had been caught marching south, not west, he reported to Hooker, “I think it is a retreat. Sometimes a regiment then a few wagons–then troops then wagons.” Hooker issued orders for the entire Army of the Potomac to be ready to pursue Lee’s army the next day. When pickets from one of Howard’s brigades reported “a queer jumble of sounds” coming from the woods, Howard told them they “must not be scared of a few bushwhackers.” Other reports from XI Corps pickets about possible enemy activity went largely ignored.

Jackson’s march took longer than expected, with the Confederates finally getting into attack position on the Orange Turnpike around 5 p.m. Deer, rabbits, and other wildlife sprang from the woods and rushed through the Federal camps, signaling that an unseen enemy force was approaching. The Confederates charged through the woods along a two-mile front, screaming the “Rebel yell.”

They shocked the unsuspecting XI Corps, sending most of the men fleeing into the one-mile gap that Sickles had caused by moving his men up to attack the marching column. This crumbled Hooker’s right flank. Meanwhile, Lee directed Confederates to fire into the defenses on the Federal front and left to divert Hooker’s attention.

Hooker ordered Sickles’s corps and some cavalry to try stemming the Confederate tide; he then sent in parts of Meade’s corps and Major General John F. Reynolds’s I Corps as well. All these forces joined to defend the area around Wilderness Church and Dowdall’s Tavern before breaking and falling back to join the main army. Sickles fell back to Hazel Grove, where Federal artillery kept the Confederates at bay for now.

Other Federal guns at Fairview Cemetery stopped the Confederate advance for the night. The Federal right had been knocked back two miles into the center and left flanks. Fighting continued sporadically into the night, marking one of the few night battles of the war.

Jackson planned to renew the attack the next day, hoping to cut off Hooker’s potential line of retreat to the Rapidan River. As Jackson and his aides returned from scouting the Federal lines around 9 p.m., Confederate pickets of the 18th North Carolina mistook them for Federal cavalry and fired on them. Several aides were shot from their horses. Jackson was shot through his right hand and twice in his left shoulder, which shattered his arm. Bleeding heavily, he was helped from his horse and laid on a litter, which litter-bearers dropped when a Federal shell exploded nearby, throwing Jackson onto his broken arm.

The men put Jackson back on the litter and brought him to a nearby ambulance, which conveyed him to a field hospital at Wilderness Tavern. Dr. Hunter Maguire, Jackson’s medical director, received Jackson’s permission to amputate his arm, just below the shoulder. Command of his corps initially passed to Major General A.P. Hill, his most senior subordinate, but Hill had been wounded in both legs by shell fragments. So it went to Major General Jeb Stuart, the Confederate cavalry commander.

The Confederate attack on this day involved one of the most daring gambles in military history, resulting in a stunning victory for Lee from which Hooker would never recover. However, the right of Jackson’s attack wave had not advanced enough to link with Lee’s left as hoped, and Jackson’s left had not seized the high ground at Chandler’s Farm. And Jackson no longer commanded the attacking force. All this helped Hooker to strengthen his defenses and save his army from complete destruction.

3 thoughts on “The Battle of Chancellorsville: Jackson Attacks”