The Federals moved through Port Gibson and crossed parts of Bayou Pierre on the 2nd. Lieutenant Colonel James H. Wilson, chief Federal engineer, repaired the bridge over Grindstone Ford so the advance could continue. Grant wrote, “The enemy is badly beaten, greatly demoralized, and exhausted of ammunition. The road to Vicksburg is open…” Meanwhile, Rear Admiral David D. Porter’s Mississippi River Squadron continued ferrying troops across the Mississippi, with gunboats covering their landing.

When Bowen learned that the Federals were on their way to the Big Black River, he ordered a withdrawal from Grand Gulf around midnight. The Confederates left five guns and moved north just as four of Porter’s gunboats approached to shell their defenses again. When Porter saw the place empty, he reported to Navy Secretary Gideon Welles, “… it is with great pleasure that I report that the Navy holds the door to Vicksburg.”

Grant wrote General-in-Chief Henry W. Halleck, “Our victory has been most complete, and the enemy thoroughly demoralized.” Bowen’s defense effort had been “a very bold one and well carried out. My force, however, was too heavy for his, and composed of well-disciplined and hardy men who know no defeat and are not willing to learn what it is.”

Grant had initially planned to advance on Vicksburg from the south, but the harsh terrain gave defenders a major advantage over attackers. Also, Confederates in Vicksburg could be supplied by the railroad leading to the state capital of Jackson. So Grant planned instead to move east, cut the railroad between Vicksburg and Jackson, and then turn to take Vicksburg to the west.

The plan called for establishing a supply base at Grand Gulf in anticipation of Major General Nathaniel P. Banks’s Army of the Gulf coming up from Louisiana to join Grant’s army. But when Grant learned that Banks would be busy trying to capture Port Hudson, he opted to “live off the country.” As the Federals moved east, they looted houses, farms, and plantations, leaving desolation in their wake. On the 6th, Sherman’s Federals arrived at Hard Times, on the west bank of the Mississippi, and began crossing to join the main army. 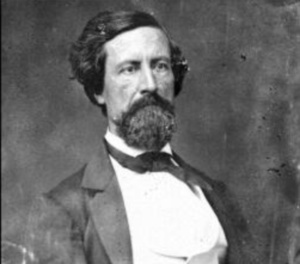 Pemberton wired Secretary of War James A. Seddon explaining that he did not receive enough reinforcements to stop the Federals. Pemberton wrote, “The stake is a great one; I can see nothing so important.” President Jefferson Davis wrote the next day, approving the withdrawal from Grand Gulf while stating, “Am anxiously expecting further information of your active operations… To hold both Vicksburg and Port Hudson is necessary to our connection with Trans-Mississippi. You may expect whatever it is in my power to do for your aid.”

This prompted Pemberton to countermand his order for Major General Franklin Gardner to lead the bulk of his force from Port Hudson to help defend Jackson. Pemberton instead directed Gardner to stay at Port Hudson “and hold it to the last. President says both places (Port Hudson and Vicksburg) must be held.” However, Pemberton received conflicting instructions from General Joseph E. Johnston, commanding the Confederate Western Department, who urged him to come out of his defenses and fight Grant, even if it meant losing Vicksburg.

By that time, Grant’s army had swelled to 44,000 men as it continued moving east. Grant commended his troops for their victory on May 1, a battle which added to “the long list of those previously won by your valor and endurance.” Grant declared, “A few days’ continuance of the same zeal and constancy will secure to this army the crowning victory over the rebellion… A grateful country will rejoice at our success, and history will record it with immortal honor.”

Grant’s Federals, led by McPherson and McClernand, began arriving at Utica, some 20 miles southwest of Jackson, on the 9th. Sherman informed Grant that supply wagons were clogging the road all the way to Grand Gulf, hampering troop movements. Grant responded:

“I do not calculate upon the possibility of supplying the army with full rations from Grand Gulf. I know it will be impossible without constructing additional roads. What I do expect, however, is to get up what rations of hard bread, coffee, and salt we can, and make the country furnish the balance.”

That same day, Seddon ordered Johnston to “proceed at once (from Tullahoma) to Mississippi and take chief command of the forces, giving to those in the field, as far as practicable, the encouragement and benefit of your personal direction. Arrange to take, for temporary service, with you, or to be followed without delay, 3,000 good troops…”

The administration hoped that Johnston could better manage the crisis in Mississippi if he was there directing Pemberton’s movements in person. Johnston, whose wounds from the Battle of Seven Pines nearly a year before were still giving him trouble, replied, “I shall go immediately, although unfit for service.” He left on the 10th, after responding to Pemberton’s report on troop positioning around Vicksburg: “Disposition of troops, as far as understood, judicious; can be readily concentrated against Grant’s army.”

Pemberton had about 23,000 troops to face 44,000 Federals. He wrote Lieutenant General Edmund Kirby Smith, commanding the Confederate Trans-Mississippi Department, “My force is insufficient for offensive operations. I must stand on the defensive in all events until reinforcements reach me.”

Grant dispatched Federal cavalry under Colonel Benjamin H. Grierson to operate around Crystal Springs, where they severed the New Orleans & Jackson Railroad line. Grant reported to Halleck on the 11th:

“My forces will be this evening as far advanced towards Fourteen Mile Creek–the left near Black River and extending in a line nearly east and west–as they can get without bringing on a general engagement. I shall communicate with Grand Gulf no more except it becomes necessary to send a train with heavy escort. You may not hear from me again for several days.”

Pemberton received word that the Federals were closing in on Edwards Station, 16 miles east of Vicksburg, in an apparent effort to wreck the Jackson & Vicksburg Railroad. Pemberton directed Brigadier General John Gregg, who had led a brigade from Port Hudson to Jackson, to scout for Federals around Raymond while defending the main crossings on the Big Black River. Gregg was unaware that McPherson’s 12,000-man corps was approaching Raymond.