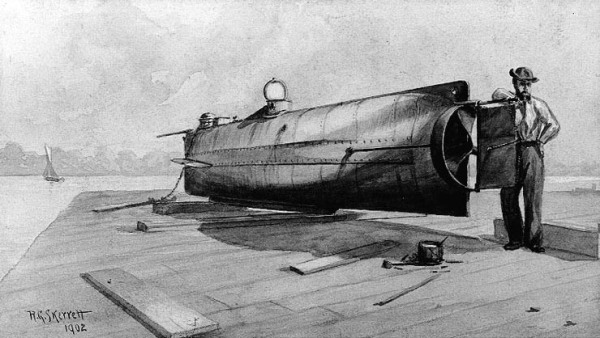 General P.G.T. Beauregard, commanding the Confederate forces defending Charleston, tried countering the mounting Federal naval pressure on the harbor by requesting the services of the C.S.S. H.L. Hunley, stationed at Mobile, Alabama. The Hunley was an innovative Confederate submarine built from a cylindrical, waterproof iron steam boiler. She was 40 feet long, 3 1/2 feet wide, and 4 feet deep. One man steered the vessel while eight others operated the hand-cranked propeller.

This submersible vessel had been developed by Horace L. Hunley, who had created the Pioneer, a prototype, on Lake Pontchartrain, Louisiana, the previous year. When the Pioneer sunk, Hunley moved his operations to Mobile and developed the Pioneer II in January. (The Federals had also developed a submarine, the Alligator, but it sank while being towed from Philadelphia to Charleston in April.)

Hunley’s third try resulted in the creation of the submersible that bore his name. The Hunley could be hand-cranked to reach a top speed of four knots. Her purpose was to plunge beneath enemy ships with floating torpedoes in tow that could be pulled into the ships’ sides and exploded. Beauregard, impressed by this new vessel’s capabilities, received permission from the Confederate government to use her in Charleston Harbor.

The Hunley left Mobile on the 12th and arrived at Charleston three days later via railroad. She was accompanied by B.A. Whitney, one of her co-owners, and co-designer James McClintock. The Hunley’s first target would be the ironclad U.S.S. New Ironsides, but it was discovered that the water where the Federal ship was stationed was not deep enough for the Hunley to go below. The Confederates therefore revised the plan to attach a spar torpedo to the Hunley’s bow instead.

The Confederates conducted three test dives over the next two weeks, and the vessel failed each one. Confederate officials then took control of the Hunley, replacing Whitney and McClintock with a naval commander, Lieutenant John A. Payne, and eight of his crewmen from the C.S.S. Chicora.

On the 29th, Confederates tied the Hunley to the steamer Etiwan docked at Fort Johnson. Crewmen had opened her front and rear hatches for better ventilation. When the Etiwan began moving unexpectedly, she pulled the Hunley onto her side. Water poured into the hatches and she sank almost immediately.

According to the report from Fort Johnson, “an unfortunate accident occurred at the wharf… by which five seamen of the Chicora were drowned. The submarine torpedo-boat became entangled in some way with ropes, was drawn on its side, filled, and went down. The bodies have not been recovered.” Payne and three crewmen escaped. Theodore Honour of the 25th North Carolina wrote his wife on the 30th:

“Just as they were leaving the wharf at Fort Johnson, where I was myself a few minutes before–an accident happened which caused the boat to go under the water before they were prepared for such a thing, and five out of the nine went down in her and were drowned, the other four made their escape. They had not up to last night recovered either the boat or the bodies–poor fellows they are five in one coffin.”

The H.L. Hunley would eventually be raised and made functional again.

One thought on “Charleston: The H.L. Hunley Sinks”