The Fall of Knoxville

September 2, 1863 – Leading elements of the Federal Army of the Ohio entered Knoxville, the key city of eastern Tennessee. This cut Virginia’s direct railroad line to the west. 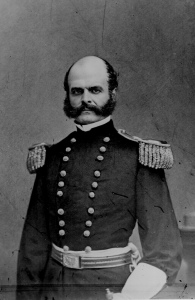 Major General Ambrose E. Burnside’s 24,000 Federals had been moving through the rugged country of eastern Tennessee since late August. Their mission was to drive the Confederates out and secure Knoxville; this would protect the right flank of Major General William S. Rosecrans’s Army of the Cumberland as it tried to capture Chattanooga, about 100 miles southwest.

The 5,000-man Confederate Army of East Tennessee, led by Lieutenant General Simon B. Buckner, defended the region. Most of Buckner’s troops were stationed at Knoxville, while another force of 2,500 Confederates under Brigadier General John W. Frazier guarded Cumberland Gap. Eastern Tennessee was predominantly Unionist, with voters having opposed secession in 1861 by a margin of two-to-one. As such, many saw Burnside’s approaching Federals as liberators.

The Federals used pack mules to traverse the mountains west of Cumberland Gap, and they arrived at Kingston unopposed on the 1st. Hopelessly outnumbered and without hope of reinforcement, Buckner abandoned Knoxville and fell back to Loudon. This isolated Frazier’s Confederates at Cumberland Gap, but Frazier “boasted that he could hold the gap for at least a month under siege.”

A Federal cavalry brigade moved through Winter’s Gap and entered Knoxville on the 2nd. Residents lined the streets and cheered the Federals’ arrival. Burnside triumphantly led two divisions into the city the next day. The people hailed the Federal heroes and celebrated their freedom from Confederate occupation. This was Burnside’s first military victory since his capture of Roanoke Island in February 1862.

The fall of Knoxville cut the last direct railroad connection between Virginia and Tennessee. The only link between them now involved a roundabout path through the Carolinas and Georgia. Buckner withdrew with all the supplies his men could take, leaving the Federals to control everything east of Loudon and west of Morrisville.

Burnside sent detachments to secure the region all the way to the Virginia and North Carolina borders. He also directed a force to capture the Confederates clinging to Cumberland Gap. This Federal detachment covered 60 miles in just two days, as Brigadier General James M. Shackelford’s Federal cavalry closed the Gap from the south.

The situation changed on the 9th, when Frazier either considered his force abandoned by Buckner or he realized the Federals were too strong to resist. He surrendered unconditionally and gave the Federals control of Cumberland Gap once again. Frazier was shipped to Fort Warren in Boston Harbor as a prisoner of war. Confederate politicians condemned him for surrendering, and the Confederate Senate rejected his officer’s commission.

As Burnside continued securing the area around Knoxville, General-in-Chief Henry W. Halleck urged him to “move down your infantry as rapidly as possible toward Chattanooga to connect with Rosecrans.” Halleck then sent a second message: “It is believed that the enemy will concentrate to give him (Rosecrans) battle. You must be there to help him.” Rosecrans asked Halleck to “At least, push Burnside down” toward Chattanooga.

Burnside replied that Halleck’s orders “will be obeyed as soon as possible.” However, he continued clearing Confederates out of the region, with Federals skirmishing near the Virginia-Tennessee border at Calhoun, Cleveland, Kingsport, and Bristol. Halleck again pleaded, “You must give him (Rosecrans) all the aid in your power.” But to the administration’s dismay, Burnside decided to stay in eastern Tennessee.

2 thoughts on “The Fall of Knoxville”