September 27, 1863 – Federal troops from the Army of the Potomac began heading west in a remarkable display of logistics, while the Federal high command looked to possibly change the command structure in the Army of the Cumberland. 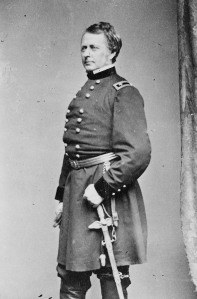 But Burnside made no clear moves to help Rosecrans, as he was bogged down by the mountainous terrain and Confederate guerrillas. And Sherman’s men relied on the Memphis & Charleston Railroad for supplies, which they had to repair as they advanced. This left Hooker’s Federals to rescue Rosecrans from General Braxton Bragg’s Confederate Army of Tennessee.

The first troop train left Culpeper, Virginia, in the late afternoon of the 25th. The trains soon began passing through Washington every hour conveying 23,000 men, 1,100 horses, artillery, ammunition, equipment, food, and other supplies. The trains moved over the Appalachians, through West Virginia and Ohio, across the Ohio River twice, through Kentucky, and on to Nashville. From there, the troops transferred for the final leg of their journey to Chattanooga.

Men of XI Corps began moving out first, followed by XII Corps. Federals quickly intercepted messages indicating that the Confederates knew about the movement. As such, Major General George G. Meade, commanding the Army of the Potomac, urged Major General Henry W. Slocum, commanding XII Corps, to move his men to Bealeton Station, across the Rappahannock River from Brandy Station, so they would be better hidden from Confederate view:

“The movement should not commence until after dark, and no preparation for it made or anything done previous to its being dark, so as to conceal the movement as far as practicable. The troops should be screened at or in the vicinity of Bealeton Station from the observation of the enemy’s signal officer on Clark’s Mountain. Watery Mountain will be cleared by our cavalry.”

Meade feared that General Robert E. Lee, commanding the Confederate Army of Northern Virginia, would find out the Federals were leaving and attack his weakened army. Indeed, a Confederate spy in Washington reported on the day the troop trains came through:

“Recent information shows that two of Meade’s army corps are on the move, large numbers of troops are at the cars, now loaded with cannon. There is no doubt as to the destination of these troops–part for Rosecrans, and perhaps for Burnside.”

However, Lee could not be sure that this was true because he also received reports stating that the Federals were reinforcing Meade rather than leaving him. Lee wrote to Richmond, “I judge by the enemy’s movements in front and the reports of my scouts in his rear that he is preparing to move against me with all the strength he can gather.” Lee then wrote Lieutenant General James Longstreet, whose corps had been detached from Lee’s army to reinforce Bragg:

“Finish the work before you, my dear General, and return to me. Your departure was known to the enemy as soon as it occurred. General Meade has been actively engaged collecting his forces and is now up to the Rapidan (River). All his troops that were sent north have returned and re-enforcements are daily arriving… We are endeavoring to maintain a bold front, and shall endeavor to delay them all we can till you return.”

Despite all the leaked intelligence, War Department officials at Washington desperately tried keeping the movement a secret. Secretary of War Edwin M. Stanton dispatched agents to meet with the major Washington reporters and secure their agreements not to write about the operation. However, one correspondent sent a dispatch to the New York Evening Post, which published a story on the rescue mission in its Saturday (the 26th) edition.

Both Stanton and President Abraham Lincoln were enraged that the story was leaked, especially considering that the troop trains had not even started heading west yet. The news reached Richmond a couple days later, when President Jefferson Davis notified Lee that two corps were moving to reinforce Rosecrans. Lee received confirmation himself when he obtained a copy of the Evening Post’s article.

The movement proceeded nonetheless. By the morning of the 27th, the railroad had transported 12,600 men through Washington. Field artillery had also passed on 33 railcars, along with 21 baggage cars. Stanton telegraphed former Assistant Secretary of War Thomas A. Scott, who had resumed control of the Pennsylvania Railroad and was now regulating train operations west of the Alleghenies from Louisville: “The whole force, except 3,300 of the XII Corps, is now moving.”

Two days later, Scott reported that trains were pulling out of Louisville regularly. Leading Federal units began arriving at Bridgeport, Rosecrans’s supply base, at 10:30 p.m. on the 30th, precisely on schedule. However, so much planning and effort had gone into getting the troops to Rosecrans that it was still unclear how these troops would help break the siege. Moreover, the arrival of XI Corps did not exactly boost the morale of the besieged Federals; this was considered the weakest corps in the eastern army due to its poor performance at Chancellorsville and Gettysburg.

Meanwhile, Assistant Secretary of War Charles Dana, observing Rosecrans’s army on behalf of the War Department, had been sending unfavorable reports to Washington on the army’s condition. Dana recommended relieving two of Rosecrans’s four corps commanders (Major Generals Alexander McCook and Thomas L. Crittenden), and on the 27th he began suggesting that Rosecrans himself may need to be removed:

“He abounds in friendliness and approbativeness, (but) is greatly lacking in firmness and steadiness of will. He is a temporizing man… If it be decided to change the chief commander also, I would take the liberty of suggesting that some Western general of high rank and great prestige, like (General Ulysses) Grant, for instance, would be preferable as his successor to any one who has hitherto commanded in East alone.”

The next day, the War Department partly acted upon Dana’s recommendation by issuing General Order No. 322, which relieved McCook and Crittenden from duty for disobedience during the Battle of Chickamauga. The order also ruled that “a court of inquiry be convened… to inquire and report upon the conduct of Major-Generals McCook and Crittenden, in the battles of the 19th and 20th instant.” The officers were sent to Indianapolis until the court convened.

McCook’s XX Corps and Crittenden’s XXI Corps were merged into a new IV Corps in the Army of the Cumberland (the original IV Corps on the Virginia Peninsula had been dissolved in August). This new corps consisted of troops mainly from the West, along with Regular army forces. Major General Gordon Granger, currently commanding the Reserve Corps, was assigned to command.

By month’s end, Dana began favoring Major General George H. Thomas, commanding XIV Corps, as a replacement for Rosecrans, writing, “Should there be a change in the chief command, there is no other man whose appointment would be so welcome to this army.” To Dana, a command change was becoming inevitable because “the soldiers have lost their attachment for (Rosecrans) since he failed them in the battle, and that they do not now cheer him until they are ordered to do so.”