The Battle of Chattanooga: Aftermath

November 26, 1863 – Major General Ulysses S. Grant’s Federal victory at Chattanooga opened Georgia to invasion and led to a command change in the Confederate Army of Tennessee. 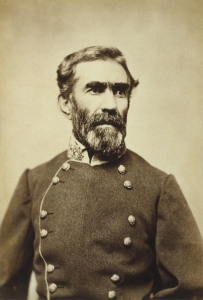 By this date, General Braxton Bragg’s two-month siege of Chattanooga had ended in defeat. As his Confederates fell back into northern Georgia, he reported:

“No satisfactory excuse can possibly be given for the shameful conduct of the troops… in allowing their line to be penetrated. The position was one which ought to have been held by a line of skirmishers against any assaulting column.”

But Bragg took no responsibility for erroneously detaching troops to Knoxville, issuing vague orders, and failing to anticipate the Federals’ intentions until it was too late. His retreating Confederates continued moving southeast on the 26th, past Chickamauga Station to Ringgold, 15 miles down the railroad connecting Chattanooga and the vital industrial city of Atlanta.

As Bragg continued retreating toward Dalton, he ordered Major General Patrick R. Cleburne’s division to block the Federals at Ringgold “at all hazards.” He then turned to his familiar pattern of blaming others by removing one of his two corps commanders, Major General John C. Breckinridge, from command. Bragg and Breckinridge had long been enemies, and Bragg alleged that Breckinridge had gotten so drunk after the battle that a division commander had to care for him during the retreat.

Hooker’s lead division under Brigadier General Peter J. Osterhaus approached Ringgold at 8 a.m. on the 27th. By that time, Cleburne’s 4,000 Confederates had entrenched themselves on Taylor’s Ridge south of town. The numerically superior Federals drove in enemy skirmishers and then tried moving around Cleburne’s right (north) flank. When that failed, Osterhaus attacked the Confederate left, but Cleburne repelled that effort as well.

Hooker brought up Brigadier General John W. Geary’s division, which made little progress until Geary committed Colonel David Ireland’s brigade against the enemy left which, according to Geary, forced the Confederates “to recoil in the zenith of (Ireland’s) audacious charge…” The Federals then brought up several guns and began pounding Cleburne’s left. The Confederate line finally wavered, and Lieutenant General William Hardee directed Cleburne to withdraw around 1 p.m.

Bragg fell back behind Rocky Face Ridge the next day and arrived at Dalton, where he consolidated his scattered army. The troops cheered the arrival of Cleburne’s men after holding the Federals off at Ringgold. As President Jefferson Davis urged Bragg to concentrate and counterattack as soon as possible, Bragg reported:

“We hope to maintain this position, (but) should the enemy press on promptly we may have to cross the Oostenaula (River, 15 miles south). My first estimate of our disaster was not too large, and time only can restore order and morale. All possible aid should be pushed on to Resaca. I deem it due to the cause and to myself to ask for relief from command and an investigation into the causes of the defeat.”

“Your dispatches of yesterday received. Your request to be relieved has been submitted to the President, who, upon your representation, directs me to notify you that you are relieved from command, which you will transfer to Lieutenant-General Hardee, the officer next in rank and now present for duty.”

Bragg immediately prepared to relinquish command of the army he had led since June 1862. During that time, he had taken the fight to the Federals by invading Kentucky, but his retreat after Perryville ended his invasion. He then lost Middle Tennessee by retreating after Stones River and Tullahoma. Bragg rebounded after giving up Chattanooga by routing the Federals at Chickamauga, but his siege of Chattanooga failed, and now his Army of Tennessee had been ousted from its home state.

For the Federals, Grant immediately looked to drive Longstreet out of eastern Tennessee. After that, he would begin planning a move into the southern heartland which included a drive on Atlanta.

One thought on “The Battle of Chattanooga: Aftermath”