Meridian: Federals Move Out of Jackson 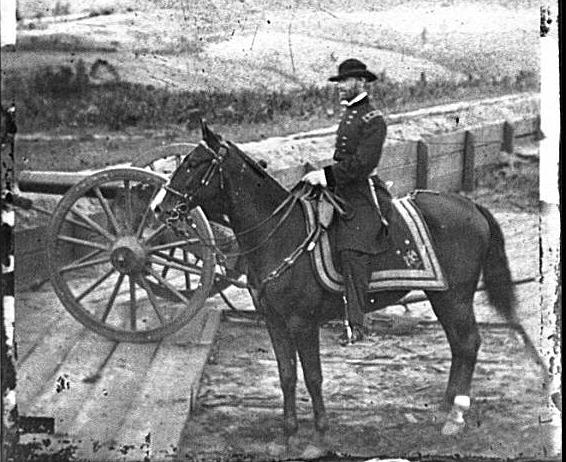 Major General James B. McPherson’s XVII Corps of Sherman’s army moved out of Jackson on the morning of the 7th. The Federals crossed the Pearl River on pontoon bridges and headed toward Major General Samuel G. French’s 3,000 Confederates, which had fallen back from Jackson to Brandon.

Colonel C.C. Wilbourn, commanding Confederate cavalry in front of Brandon, reported, “The enemy have crossed the river and are driving my men in on both the upper and lower Jackson roads. They are fighting me altogether with small arms.” Colonel Edward Winslow’s Federal horsemen easily drove Wilbourn’s small force off. French then abandoned Brandon and moved to join with Major General William W. Loring’s 6,000 Confederates near Morton.

Lieutenant General Leonidas Polk, commanding the Confederate Department of Alabama, Mississippi, and East Louisiana, urged Major General Stephen D. Lee to link his cavalry with Major General Nathan Bedford Forrest’s troopers, about 150 miles north of Jackson, and wreak havoc on Sherman’s supply line. They did not know that Sherman’s men were living off the land and had no supply line to disrupt.

McPherson’s Federals entered Brandon and immediately set about destroying everything considered useful (or otherwise) to the Confederate war effort. A correspondent for the New York Tribune reported:

“The houses of prominent rebels were burned. Every horse and mule that could be found was seized upon, and the number became so great that a special detail was made to care for them. In fact, everything of an edible nature was levied upon and made an item in our commissariat. Thousands of blacks came into our lines. The railroad track was torn up, and every wagon, bridge, and depot was burned.”

Sherman had issued orders not to disturb private property, but most officers did not enforce them. Meanwhile, Polk relayed information he received from one of his scouts about the Federals: “They do not try to conceal that their destination is Meridian, to cut our communication with Mobile.”

The Federal forces resumed their eastward advance the next day, as French, Loring, and Lee joined forces at Morton to make a stand. Some skirmishing occurred between the advancing Federals and Lee’s retreating troopers at Coldwater Ferry. Seeing that they lacked the numbers to stop the enemy, the Confederates abandoned Morton that night and fell back eastward once more.

Meanwhile, Brigadier General William Sooy Smith was preparing to lead his Federal cavalrymen out of Tennessee to wreak havoc on the Mobile & Ohio Railroad, destroy Forrest’s Confederates, and link with Sherman. He was supposed to have left on the 1st, but he was waiting for an additional brigade to join him from Union City.

Back in central Mississippi, Sherman’s Federals briefly skirmished with the Confederate rear guard before entering Morton on the 9th. Repeating their destruction of Jackson and Brandon, they burned nearly everything in their path. East of Morton, Polk arrived from Mobile to join his army in the field. Believing that Sherman’s ultimate target was Mobile, Polk wired the commander there, “The enemy, estimated at 35,000 infantry, with 60 pieces of artillery, moved to-day from Morton in the direction of Mobile.”

Polk directed French to go to Newton and load his men on trains bound for Mobile. Lee’s cavalry would “cover Newton until the troops leave there, and cover the Mobile and Ohio Railroad until they pass down.” French was to fall back to Meridian. Lee disagreed with Polk’s assessment that Sherman was headed for Mobile, but he complied with orders nonetheless.

Back near Memphis, the 2,000 Federal cavalrymen under Colonel George E. Waring arrived to reinforce W.S. Smith’s command on the 10th. Smith prepared to finally move out the next day, 10 days after he was scheduled to begin. He expressed confidence that his 7,000 troopers could defeat Forrest’s 2,500 horsemen, vowing “to pitch into Forrest wherever I find him.” Smith tried explaining his tardiness to Sherman:

“I fear this delay will rob me of the opportunity of accomplishing the work assigned to me; but it has been unavoidable by any effort that I could make, and I will now do all that I can. My command is in splendid condition, and all the information that I have been able to get–and it is quite full, and, I think, reliable–justifies me in waiting for the brigade from above. I will hurt them all I can, and endeavor to open direct communication with you at the earliest possible moment. Weather beautiful; roads getting good.”

Forrest, whose command was camped along the Tallahatchie River, guessed that Smith would target Okolona, a railroad hub about 55 miles southeast of Forrest’s Oxford headquarters. He set up defenses along the river and issued orders to his commanders: “Do not allow your command to engage a superior force. Fall back to the river and defend the crossings. The enemy will attempt to move on our right by the way of Ripley, and from Collierville toward Okolona.”

Brigadier General James Chalmers, commanding Forrest’s left at Panola, was to be “prepared to move at a moment’s notice.” Chalmers wrote Forrest, “Will try to deceive the enemy into the belief that we are evacuating to induce them to come on.” Forrest approved, but instructed Chalmers not to use his artillery “unless compelled.”

Unbeknownst to Forrest or Chalmers, Smith had sent an infantry brigade under Colonel William McMillen on a diversionary advance toward Chalmers while Smith’s main force crossed the Tallahatchie en route to Okolona. Unbeknownst to Smith, he would be moving directly toward the point that Forrest expected.