April 2, 1864 – Federal forces at Natchitoches, Louisiana, looked to continue further up the Red River on the way to their ultimate goal of Shreveport and eastern Texas beyond. 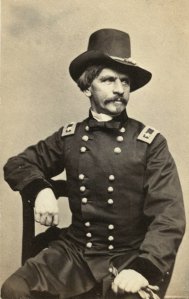 As April began, Major General Nathaniel P. Banks’s Army of the Gulf, supported by 10,000 troops under Brigadier General Andrew J. Smith and Rear Admiral David D. Porter’s massive naval fleet on the Red River, held Natchitoches. They were about halfway between Alexandria and the vital cotton-producing city of Shreveport. A correspondent from the New York Tribune noted something strange about this campaign thus far:

“It is a remarkable fact that this Red River expedition is not followed by that anxious interest and solicitude which has heretofore attended similar army movements. The success of our troops is looked upon as a matter of course, and the cotton speculators are the only people I can find who are nicely weighing probabilities and chances in connection with the expedition.”

Banks halted the Federal advance while he supervised an election in Alexandria. Federals decorated the town with flags and bunting to try instilling a patriotic spirit. Residents wanting to vote were required to pledge loyalty to the U.S.; only 300 did. Predictably, they elected fellow Unionists to represent them in the upcoming convention to draft a new Louisiana constitution.

Banks also took the time to finally respond to Lieutenant General Ulysses S. Grant’s letter from March 15. Grant ordered Banks to return A.J. Smith’s troops to Major General William T. Sherman’s army no later than April 15 so Sherman could launch his spring offensive. Banks was to send the troops back whether he captured Shreveport by then or not. Banks responded by predicting “an immediate and successful issue” of this operation. He continued:

“Our troops now occupy Natchitoches, and we hope to be in Shreveport by the 10th of April. I do not fear concentration of the enemy at that point. My fear is that they may not be willing to meet us there; if not, and my forces are not weakened to too great an extent, I shall pursue the enemy into the interior of Texas, for my sole purpose of destroying or dispersing his forces, if in my power, keeping in view the necessity of the co-operation of some of my troops east of the Mississippi, and losing no time in the campaign in which I am engaged.”

While this seemed to imply that the campaign would extend beyond the deadline that Grant imposed, Banks assured Grant that “General Smith’s command will return to Vicksburg on the 15th or 17th of this month.” However, Banks noted that the Red River was “very low, which has delayed our operations… the gunboats were not able to cross the rapids at Alexandria until day before yesterday.”

Actually, Porter was still working to get all his vessels over Alexandria Falls, and the fleet began arriving at Grand Ecore, about 50 miles upriver from Alexandria. This was the staging area for the next leg of the expedition. By the end of the 2nd, Porter’s entire fleet had finally passed the treacherous falls.

The vessels began concentrating at Grand Ecore the next day, with A.J. Smith’s Federals debarking from their transports and meeting slight Confederate resistance. Banks staged a review of his army at Natchitoches on the 4th, and then confidently wrote his wife, “The enemy retreats before us, and will not fight a battle this side of Shreveport if then.” 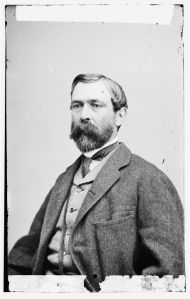 As Banks moved to link with A.J. Smith at Grand Ecore, Confederates under Major General Richard Taylor fell back to Mansfield, about 40 miles west, near the Texas border. General Edmund Kirby Smith, commanding the Confederate Trans-Mississippi Department over Taylor, vacillated over whether he should make a stand at Shreveport, attack Major General Frederick Steele’s Federals moving south from Little Rock, Arkansas, or fall back into Texas.

Taylor wanted to attack Banks as soon as the two brigades that E.K. Smith pulled from Major General Sterling Price’s army in Arkansas arrived to reinforce him. However, Smith kept the troops that Price had sent at Shreveport rather than sending them to Taylor at Mansfield. Smith was still pondering what to do.

On the 3rd, Smith permitted the Confederates at Shreveport, under Brigadier General Thomas J. Churchill, to move to Keachi, between Mansfield and Shreveport. Smith’s refusal to fully reinforce Taylor enraged him. Taylor wrote, “Like the man who had admitted the robber into his bed-chamber instead of resisting him at the door, our defense will be embarrassed by the cries of women and children.”

Having helped defeat Banks in the Shenandoah Valley in 1862, Taylor advised Smith that the Confederates needed–

“Action, prompt, vigorous action. While we are deliberating the enemy is marching. King James lost three kingdoms for a mass. We may lose three states without a battle. Banks is cold, timid, easily foiled. He depends principally on the river for transportation. Steele is bold, ardent, vigorous. Independent of rivers, his transportation has doubtless been made ample for his purposes. If he has anything like the force represented he will sweep Price from his path. He is the most dangerous and should be met and overthrown at once.”

Smith’s reply indicated that he was still unsure whether Banks or Steele was the greater threat and, noting that the two armies were still over 200 miles apart, he wrote that the distance “is far too great for us to concentrate on either column.” Smith continued:

“Our position is a good one. We occupy the interior line, and a concentration is being forced which otherwise could never have happened. While we retain our little army undefeated we have hopes. When we fight, it must be for victory. Defeat not only loses the department, but releases the armies employed against us here for operation beyond the Mississippi.”

Smith explained that he wanted to hold both Louisiana and Arkansas, but to do so, he needed to avoid the destruction of either Taylor’s or Price’s army. Smith informed Taylor that he would leave his Shreveport headquarters and consult with him in person at Mansfield on the 6th.