May 2, 1864 – Major General Frederick Steele’s Federal Army of Arkansas began returning to Little Rock, while Federal naval forces on the Red River in Louisiana were in grave danger of being stranded in shallow water. 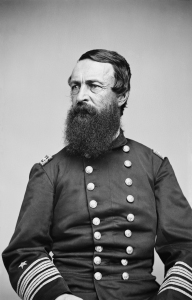 By the beginning of May, the Federal mission to capture the vital cotton-producing city of Shreveport via the Red River and Arkansas had failed. Major General Nathaniel P. Banks’s Army of the Gulf was back where it started at Alexandria and Steele, who had been expected to meet Banks at Shreveport, was retreating from Camden to Little Rock. These two forces retreated intact, but Rear Admiral David D. Porter’s Federal naval flotilla on the Red River faced potential destruction.

The river had been falling for weeks, and the vessels that had moved upstream now did not have deep enough water to get back down. In late April, Lieutenant Colonel Joseph Bailey had put Federals to work building dams that would raise the water and, when burst, create a current large enough for the vessels to float over the jagged rocks in the riverbed and steam to safety.

The Federals working to get the squadron downstream were under constant attack from Confederates on shore. The Confederates destroyed the Federal transport Emma at David’s Ferry, 30 miles below Alexandria, taking the captain and crew prisoner. A few days later, they captured the Federal transport City Belle at the same spot and took over a third of the 700 troops aboard prisoner (the rest jumped overboard to escape). Meanwhile, guerrillas clashed with Federals around the plantation of Louisiana Governor Thomas O. Moore.

At Dunn’s Bayou below Alexandria, Confederate infantry and shore batteries attacked the Federal transport Warner and her gunboat escorts, the U.S.S. Covington and Signal, as they rounded a bend. The Warner carried Ohio troops going home on furlough as a reward for reenlisting. She was immediately disabled and grounded in a bend near Pierce’s Landing.

The Confederates then disabled the Signal, forcing her to surrender when the Covington lost most of her crew and ran out of ammunition. In the first five days of May, Confederates had inflicted nearly 600 casualties while destroying two gunboats and three transports. 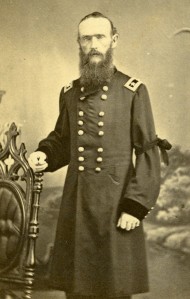 During this time, Steele’s demoralized Federals straggled back to Little Rock from Camden. In his mission to advance to Shreveport, Steele never even got out of Arkansas due to lack of supplies and Banks’s failure in Louisiana. Steele’s army sustained 2,750 casualties while losing nine guns and nearly 700 supply wagons. In his report, Steele called his campaign the “Camden expedition” without acknowledging that it was supposed to have been the “Shreveport expedition.”

Steele’s retreat allowed General Edmund Kirby Smith, commanding the Confederate Trans-Mississippi Department, to shift his primary focus from Arkansas to Louisiana. Smith issued orders for his Confederates at Camden to move “by the most direct route to Louisiana” to confront both Banks’s dispirited army and Porter’s vulnerable flotilla.

Lieutenant General Richard Taylor, commanding the Louisiana district under Smith, notified him that the Confederate victory at Dunn’s Bayou had turned the lower Red River into “a mare clausum. Forage and subsistence of every kind have been removed beyond the enemy’s reach. Rigid orders are given to destroy everything useful that can fall into his hands. We will play the game the Russians played in the retreat from Moscow.”

As Confederate troops hurried from Arkansas back to Louisiana, Bailey’s Federals continued working to dam the 758-foot-wide Red River. By the 8th, the dam had been built on either side of the river, leaving a 150-foot gap in the center. This raised the water level high enough for three of the lighter-draft gunboats (the U.S.S. Fort Hindman, Neosho, and Osage) to go through the upper falls, just before the dam.

On each dam wing, Bailey directed the sinking of two stone barges to raise the water even higher. However, two of the barges broke loose under the pressure, allowing a massive flood of water to surge through the chute in the center. Porter quickly ordered the three gunboats, along with the U.S.S. Lexington, to try passing on this wave. The Lexington tried first.

According to Porter, the timberclad “steered directly for the opening in the dam, through which the water was rushing so furiously that it seemed as if nothing but destruction awaited her. Thousands of beating hearts looked on anxious for the result; the silence was so great as the Lexington approached the dam that a pin might almost be heard to fall.”

The Lexington, “with a full head of steam on, pitched down the roaring torrent, made two or three spasmodic rolls, hung for a moment on the rocks below, was then swept into deep water by the current and rounded to, safely, into the bank. Thirty thousand voices rose in one deafening roar.” The next three gunboats also passed safely, after which Bailey’s Federals began working to shore up the dam for the rest of the flotilla to pass.