July 29, 1864 – The final preparations were made to detonate gunpowder in a tunnel below the Confederate lines at Petersburg.

By this time, the miners of the 48th Pennsylvania under Lieutenant Colonel Henry Pleasants had completed digging the tunnel under enemy fortifications at Elliott’s Salient, outside Petersburg. The Pennsylvanians planned to mine the tunnel with gunpowder and blow a hole in the Confederate line, but they had been waiting three days for the material to arrive. The Confederates believed that the Federals had dug a tunnel, but they could not find it.

The 48th belonged to Major General Ambrose Burnside’s IX Corps. Burnside had approved the project and reported to Major General George G. Meade, commanding the Federal Army of the Potomac, that it was completed. Burnside warned, “It is altogether probable that the enemy are cognizant of the fact that we are mining, because it is mentioned in their papers, and they have been heard to work on what are supposed to be shafts in close proximity to our galleries.”

However, Burnside expressed confidence that if the Federals used the tunnel within three days, it was “probable that we will escape discovery.” Thus, it was “highly important, in my opinion, that the mine should be exploded at the earliest possible moment consistent with the general interests of the campaign.”

Burnside had been training Brigadier General Edward Ferrero’s division of U.S. Colored Troops to lead the Federal assault through the gap that would be caused by the explosives. According to Burnside’s plan, the Federals would “explode the mine just before daylight in the morning, or at about five o’clock in the afternoon. Mass two brigades of the colored division in rear of my first line, in columns of division… and as soon as the explosion has taken place, move them forward with instructions for the division to take half distance.”

Reinforcements would follow the black troops once they penetrated the Confederate line. Burnside wrote that after the line was broken, “It would, in my opinion, be advisable, if we succeed in gaining the crest, to throw the colored division right into the town.”

Four days after the tunnel’s completion, the gunpowder and fuses finally began arriving. However, Pleasants discovered that the fuses were not long enough to cover the 511-foot length of the shaft. Pleasants later testified, “They sent just whatever they had. It hardly ever happens that they require fuze for that distance.” Pleasants had also requested 12,000 pounds of gunpowder but received only 8,000. Nevertheless, as he recounted:

“The charge consisted of 320 kegs of powder, each containing about 25 pounds. It was placed in eight magazines, connected with each other by troughs half filled with powder. These troughs from the lateral galleries met at the inner end of the main one, and from this point I had three fuzes for a distance of 98 feet. Not having fuzes as long as required, two pieces had to be spliced together to make the required length of each of the lines.”

The magazines were sandbagged to direct the explosion upward. 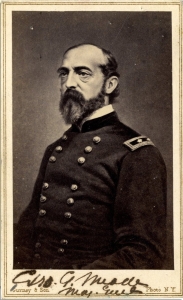 With everything in place, Meade rejected Burnside’s plan to use the black division to lead the assault. According to Lieutenant Colonel Theodore Lyman of Meade’s staff, Meade argued “that these negroes were green and had never seen a great action; he had no right to run risks; if they failed people would justly say ‘Oh! You put forward the negroes to sacrifice them for nothing!’”

Meade seemed to lack confidence in the fighting ability of black troops. But according to Lieutenant General Ulysses S. Grant, the overall Federal commander:

“General Meade said that if we put the colored troops in front (we had only that one division) and it should prove a failure, it would then be said, and very properly, that we were shoving those people ahead to get killed because we did not care anything about them. But that could not be said if we put the white troops in front… I do not think it would have been proper to put them in front, for nothing but success would have justified it.”

Burnside explained that the black troops had been trained for this mission, and his “three white divisions had for 40 days been in the trenches in the immediate presence of the enemy, and at no point of the line could a man raise his head above the parapet without being fired at by the enemy. That they had been in the habit, during the whole of the time, of approaching the main line by covered ways, and using every possible means of protecting themselves from the fire of the enemy.”

When asked to reconsider, Meade said, “No, general, the order is final.” Burnside said, “Very well, general, I will carry out this plan to the best of my ability.” Demoralized, Burnside gathered the commanders of his white divisions and let them decide who would lead the assault.

The commanders drew straws and Brigadier General James Ledlie, a questionable leader known for drunkenness, was chosen. Brigadier Generals Orlando Willcox and Robert Potter would follow Ledlie, with Ferrero’s black division in the rear. The Federals made their final preparations on the afternoon of the 29th, with the mine set to be exploded at 3:30 the next morning.