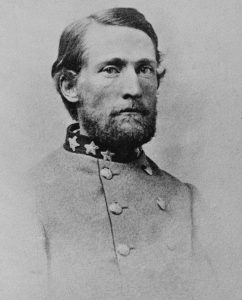 Major General Philip Sheridan’s Federal Army of the Shenandoah had cleared all organized Confederate resistance from the Valley following its victory at Fisher’s Hill in September. This left only raiders to wreak havoc on Sheridan’s supply lines, hoping to force him to fall back “down” the Valley to his supply base. Mosby was among the most prominent raiders in the region.

After reentering the Valley, Mosby and his 84 troopers hid near Winchester on the 13th, and then moved west after sundown. The Confederates stopped near Kearneysville, west of Harpers Ferry, and wrecked track on the Baltimore & Ohio Railroad near Brown’s Crossing. They then waited for a train to approach.

Some time after 2 a.m., a westbound train derailed on the broken track and crashed into the bank. The conductor came out and promptly surrendered the train. Mosby called out, “Board her, boys!” and his men climbed aboard. They robbed the passengers and seized a satchel and a tin box from army paymasters that contained $173,000 in Federal greenbacks. The partisans pulled the passengers off the train before burning the cars and the locomotive.

Mosby’s troopers raced off into West Virginia, where they divided the loot into shares for each of the 84 men. Mosby refused to take a share, asserting that he was “fighting for glory, not for spoils.” His “greenback” raid temporarily halted traffic on the B&O Railroad and partially disrupted Sheridan’s main supply line. It also served as a forerunner to the famous train robberies that took place after the war.