January 26, 1865 – Confederate President Jefferson Davis signed a bill into law creating the military rank of general-in-chief of all Confederate armies. 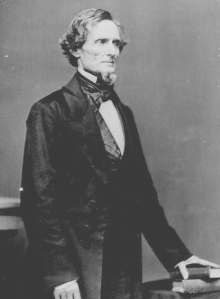 The Confederate Congress was becoming increasingly hostile to Davis’s war policies and sought a way to check his power as military commander-in-chief. They drafted a bill providing for a top army general much like Ulysses S. Grant was for the Federal armies. But Davis had threatened to veto the measure, arguing that it infringed on his constitutional duties. Davis also opposed the added provision promoting Generals P.G.T. Beauregard and Joseph E. Johnston. The president explained:

“The power to assign generals to appropriate duties is a function of the trust confided in me by my countrymen. That trust I have ever been ready to resign at my country’s call; but, while I hold it, nothing shall induce me to shrink from its responsibilities or to violate the obligations it imposes.”

The Senate amended the bill by omitting the Johnston provision and passed it by a vote of 14 to 2. During this time, the Virginia General Assembly approved a resolution calling for General Robert E. Lee, commander of the Army of Northern Virginia, to become the general-in-chief of all Confederate armies. This would promote military efficiency, revive soldier morale, and “inspire increased confidence in the final success of our arms.”

Davis resisted the idea but praised the “uncalculating, unhesitating spirit with which Virginia has, from the moment when she first drew her sword, consecrated the blood of her children and all her natural resources to the achievement of the object our struggle… whenever it shall be found practicable by General Lee to assume command of all the Armies of the Confederate States, without withdrawing from the direct command of the Army of Northern Virginia, I will deem it promotive of the public interest to place him in such command, and will be happy to know that by so doing I am responding to expressed desire.”

Knowing that Lee would be reluctant to accept such a position, Davis asked if he would be interested in the post if offered “while retaining command of the Army of Northern Virginia.” Lee answered that he would “undertake any service to which you think proper to assign me,” but added, “I must state that with the addition of the immediate command of this army I do not think I could accomplish any good. If I had the ability I would not have the time.”

Despite Lee’s reservations, the House of Representatives followed the Senate’s lead and passed the bill creating a general-in-chief on the 23rd. The bill then went to Davis for his signature. Many predicted he would veto the measure, but three days after its passage, he signed it into law and thereby relinquished the title of army commander-in-chief.

Secretary of War James A. Seddon recommended Robert E. Lee for the new post, and Davis endorsed Seddon’s recommendation by nominating Lee on the last day of January. The Senate confirmed the nomination that same day, and Lee became the first and only Confederate general-in-chief. Lee wrote to Adjutant General Samuel Cooper: “I am indebted alone to the kindness of His Excellency the President for my nomination to this high and arduous office. As I have received no instructions as to my duties, I do not know what he desires for me to undertake.”

Lee also thanked Davis for “your indulgence and kind consideration… I must beg you to continue these same feelings to me in the future and allow me to refer to you at all times for counsel and advice. I cannot otherwise hope to be of service to you or the country… If I can relieve you from a portion of the constant labor and anxiety which presses upon you, I shall be more than compensated for any present burdens.”

Promoting Lee came too late to affect the war’s outcome.

2 thoughts on “The Confederate General-in-Chief”