March 31, 1865 – Confederates repelled a Federal advance in the southwestern sector of the Petersburg siege lines, but the Federals would not be denied for long.

The heavy rains had finally stopped by the morning of the 31st. Confederate infantry and cavalry from the Army of Northern Virginia held Five Forks, a key intersection protecting the South Side Railroad west of Petersburg. General Robert E. Lee, commanding the Confederate army, ordered this force to move south and drive Major General Philip Sheridan’s Federal cavalry corps out of Dinwiddie Court House. This would secure Five Forks and isolate Sheridan from infantry support to the east.

As Lee inspected the lines, he saw a gap between Sheridan and Major General Gouverneur Warren’s V Corps. He therefore ordered Lieutenant General Richard H. Anderson’s Fourth Corps, which by now consisted of just a single division, to attack and turn Warren’s left (west) flank away from Sheridan. In all, about 19,000 Confederates opposed some 50,000 Federals in the southwestern sector of the Petersburg lines.

“I cannot take up any regular line of battle on account of the woods and swamps, but have assembled each division at a point so they can fight in any direction with the line refused… I don’t think your left could be turned, even if I moved away, without you having full information.”

Major General George G. Meade, commanding the Federal Army of the Potomac, notified Warren, “Owing to the weather, no change will today be made in the present position of the troops. Three days’ rations of subsistence and forage will be brought up and issued to the troops and the artillery, and every one authorized to accompany them.” The Federals were unaware that a Confederate attack was imminent.

Meanwhile, Sheridan planned an attack of his own, as Brigadier General Thomas C. Devin, known as “Sheridan’s hard hitter,” advanced his division north toward Five Forks. The Federals were unexpectedly met by a Confederate assault from their left, led by Major General George Pickett. Devin’s men gradually fell back across the rain-soaked ground, as Devin notified Sheridan that both his flanks were under threat and Dinwiddie might have to be abandoned.

Sheridan brought up his other two divisions and secured a defense line about a mile north of Dinwiddie. The Confederates charged around dusk, but the Federals held firm as Sheridan instructed all regimental bands to come up to the front and play joyful music as loud as possible to jar enemy morale.

Sheridan then ordered Brigadier General George A. Custer to lead his division in a counterattack, telling Custer, “You understand? I want you to give it to them!” However, this effort came to nothing as the men and horses became tangled in the mud. Both sides fell back out of firing range as the sun set.

Three miles east, Warren ordered his lead division under Major General Romeyn B. Ayres to seize the White Oak Road because this was “essentially necessary to the safety of our position.” The Federals were suddenly met by Anderson’s charging Confederates. Ayres reported: “As the troops arrived within about fifty yards of the White Oak road, the enemy’s lines of battle rose up in the woods and moved forward across the road into the open. I saw at once that they had four or five to my one.”

Ayres tried holding his ground, but some Confederates moved around and attacked his left flank, thus forcing him to fall back into Major General Samuel W. Crawford’s division. Crawford’s men broke as well, and the Federals retreated to a branch of Gravelly Run. Warren ordered them to hold there while he brought up his last division, under Major General Charles Griffin.

“If the enemy has been checked in Warren’s front, what is to prevent him from pitching in with his whole corps and attacking before giving him time to entrench or return in good order to his old entrenchments? I do not understand why Warren permitted his corps to be fought in detail. When Ayres was pushed forward he should have sent other troops to their support.”

By nightfall, Pickett had won a tactical victory, but the Confederates had failed to drive Sheridan out of Dinwiddie or prevent the Federal cavalry and infantry from joining forces. Recognizing the danger of his position, Pickett fell back to protect Five Forks. His infantry held the line to the left while Major General Fitzhugh Lee’s cavalry held the right. There was still a three-mile gap between this force and Anderson’s to the east. 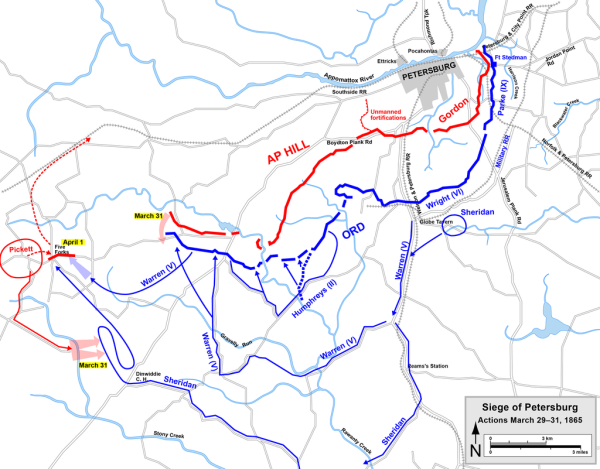 Sheridan planned a frontal assault on Pickett and Fitzhugh Lee the next day. In conjunction, he wanted infantry to march through the gap and come up on Pickett’s left and rear. The nearest infantry was Warren’s V Corps, but Sheridan wanted Major General Horatio G. Wright’s VI Corps, which had served under him in the Shenandoah Valley, to join him. Sheridan wrote Grant on the night of the 31st: “If the ground would permit I could, with the Sixth Corps, turn the enemy’s right, or break through his lines; but I would not like the Fifth Corps to make such an attempt.” Grant later wrote:

“I replied to him that it was impossible to send Wright’s corps because that corps was already in line close up to the enemy, where we should want him to assault when the proper time came, and was besides a long distance from him; but the 2d and 5th corps were on our extreme left and a little to the rear of it in a position to threaten the left flank of the enemy at Five Forks, and that I would send Warren… and put himself in communication with Sheridan as soon as possible, and report to him.”

Just as the men of V Corps settled down from the all-day fight, Warren received orders to march them westward all night to link with Sheridan by dawn. This proved extremely difficult, not only because the troops were exhausted, but because they would have to move in darkness across swollen creeks, swamps, and mud. They also had to stop and build a 40-foot bridge to span Gravelly Run. Warren informed Meade of the delay, but this was not forwarded to Sheridan, who wrote Warren at 3 a.m. on the 1st:

“I am holding in front of Dinwiddie Court-House, on the road leading to Five Forks, for three-fourths of a mile, with General Custer’s division… I understand you have a division at J. Boisseau’s; if so, you are in rear of the enemy’s line and almost on his flank. I will hold on here. Possibly they may attack Custer at daylight; if so, have this division attack instantly and in full force.”

Sheridan did not receive any specific details as to where Warren was or when he might arrive. He also knew nothing about the difficulties Warren’s men faced in trying to reach Sheridan’s line. Moreover, Sheridan did not trust Warren, so if there was to be any delay in arriving in time for the next day’s fight, Warren would get the blame.