The Fall of Petersburg: Part 2

The fall of both Petersburg and Richmond were imminent by the morning of the 3rd. But Grant, the overall Federal commander, knew that nothing would be won until Lee’s Army of Northern Virginia was destroyed. He therefore ordered another artillery bombardment to begin at 5 a.m., followed by another infantry advance to clear out any remaining Confederates in the siege lines outside Petersburg.

The renewed drive proved unnecessary when Federal troops from IX Corps overran the lines, entered Petersburg early on the 3rd, and discovered that the Confederates had retreated across the Appomattox River. Grant rode into Petersburg around 9 a.m. and was greeted by cheering soldiers, blaring bands, and black residents. Most white residents stayed in their homes. 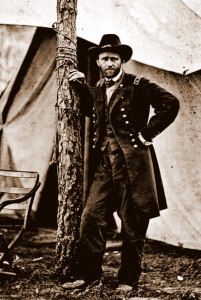 Soldiers and civilians were not impressed with Petersburg, mainly because it had been under siege for 10 months and had little to offer anyone in the way of food or comfort. Grant set up temporary headquarters at the home of Thomas Wallace on 21 Market Street. An officer noted that Grant stood in a doorway, “as if the work before him was a mere matter of business in which he felt no particular enthusiasm or care.” He had already begun planning his westward hunt for Lee’s army.

Meanwhile, President Abraham Lincoln at City Point received reports of Petersburg’s fall and accepted an invitation to meet Grant in the captured city. Lincoln telegraphed Secretary of War Edwin M. Stanton in Washington at 8 a.m.: “Grant reports Petersburg evacuated, and he is confident Richmond also is. He is pushing forward to cut off, if possible, the retreating army. I start to join him in a few minutes.”

Lincoln took a train to the Petersburg outskirts with his son Tad, a White House guard, and Rear Admiral David D. Porter. Lincoln’s older son Robert, serving on Grant’s staff, met his father’s party with horses, and they all rode up Market Street to meet with Grant on the porch of the Wallace house.

Lincoln and Grant shook hands, and the president said, “Do you know, General, that I have had a sort of sneaking idea for some days that you intended to do something like this?” Grant said, “I had a feeling that it would be better to let Lee’s old antagonists give his army the final blow and finish up the job. I have always felt confident that our troops here were amply able to handle Lee.” As Grant later wrote:

“I told him (Lincoln) that I had been very anxious to have the Eastern armies vanquish their old enemy who had so long resisted all their repeated and gallant attempts to subdue them or drive them from their capital… I said to him that if the Western armies should be even upon the field, operating against Richmond and Lee, the credit would be given to them for the capture, by politicians and non-combatants from the section of country which those troops hailed from. It might lead to disagreeable bickerings between members of Congress of the East and those of the West in some of their debates… Mr. Lincoln said he saw that now, but had never thought of it before, because his anxiety was so great that he did not care where the aid came from so the work was done.”

The men conferred on the porch for over an hour, during which time slaves gathered to watch them. Grant hoped to receive word that Richmond had fallen before he had to leave, but no news came. There would be no celebrating; Grant set out to organize the pursuit that he hoped would result in the end of the war. He guessed that Lee would head for the junction of the Richmond & Danville and South Side railroads at Burkeville, 40 miles southwest of Richmond.

Grant, whose westernmost Federals were closer to Burkeville than any of Lee’s Confederates, wanted to assemble his forces at that town and block Lee from any further westward escape. He rode out to direct the movement and stopped at Sutherland Station, west of Petersburg, which was held by Major General John Gibbon’s XXIV Corps from the Army of the James. Grant received a message: “Weitzel entered Richmond this morning at half past eight.” Gibbon’s men cheered wildly upon hearing the news, while Grant quickly put together a plan of pursuit:

Grant notified Sherman of the plan and warned that if Lee got to Burkeville first, “you will have to take care of him with the force you have for a while.” But if Grant got there first, “there will be no special use in you going any farther into the interior. This army has now won a most decisive victory and followed the enemy. This is all it ever wanted to make it as good an army as ever fought a battle.”

“Allow me to respectfully ask you to consider whether you ought to expose the nation to the consequences of any disaster to yourself in the pursuit of a treacherous and dangerous enemy like the rebel army. If it was a question concerning yourself only I should not presume to say a word. Commanding Generals are in the line of duty running such risks. But is the political head of a nation in the same condition?”

Lincoln replied, “Yours received. Thanks for your caution, but I have already been to Petersburg, staid with Gen. Grant an hour & a half, and returned here. It is certain now that Richmond is in our hands, and I think I will go there tomorrow. I will take care of myself.” Lincoln told Porter, “Thank God I have lived to see this. It seems to me that I have been dreaming a horrid dream for four years, and now the nightmare is gone. I want to see Richmond.”