May 26, 1865 – Federal commanders accepted the surrender of the last major organized Confederate force still in the field. 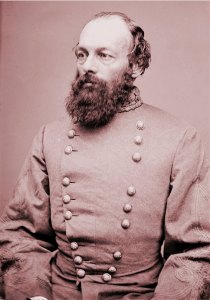 Confederate General Edmund Kirby Smith commanded the Trans-Mississippi District, in which the Army of the West was assigned to cover western Louisiana, Missouri, Arkansas, the Indian Territory (now Oklahoma), Texas, and the territories of New Mexico and Arizona. The army had not been much of a fighting force since its failed Missouri incursion last fall, but Smith urged his men to continue resisting nonetheless:

“Show that you are worthy of your position in history. Prove to the world that your hearts have not failed in the hour of disaster, and that at the last moment you will sustain the holy cause which has been so gloriously battled for by your brethren east of the Mississippi… The great resources of this department, its vast extent, the numbers, the discipline, and the efficiency of the army, will secure to our country terms that a proud people can accept, and may, under the Providence of God, be the means of checking the triumph of our enemy and securing the final success of our cause.”

In early May, Smith rejected a proposal from Major General John Pope, commanding the Federal Department of the Missouri, to surrender under the same terms that Ulysses S. Grant had given Robert E. Lee, William T. Sherman had given Joseph E. Johnston, and E.R.S. Canby had given Richard Taylor. Two days later, Smith reported that most of his 50,000 men had “dissolved all military organization and returned to their homes.”

Nevertheless, Smith continued holding out while other Confederate commanders gave in. Brigadier General M. Jeff Thompson, the “Swamp Fox of the Confederacy” who had harassed Federals in Missouri and Arkansas throughout the war, surrendered the remnants of his brigade at Chalk Bluff, Arkansas. Major General Samuel Jones surrendered his small command in Florida at Tallahassee. And notorious raider William C. Quantrill was mortally wounded in Spencer County, Kentucky, thereby ending most of the guerrilla warfare in the border states.

Finally realizing that Federal numbers might be too overwhelming, Smith called a conference with the exiled governors of Louisiana, Missouri, Arkansas, and Texas at Marshall, Texas, on the 13th. Smith told the attendees that it was his duty to hold out “at least until President Davis reaches this department, or I receive some definite orders from him.” Smith was still unaware that Jefferson Davis had been captured.

The governors disagreed, considering it “useless for the Trans-Mississippi Department to undertake to do what the Cis-Mississippi Department had failed to do.” However, Brigadier General Joseph O. “Jo” Shelby, one of Smith’s lieutenants, threatened to arrest his superior if he followed the governors’ advice and surrendered. The men ultimately decided to appoint Louisiana Governor Henry W. Allen to go to Washington to try negotiating a settlement.

Two days later, Smith refused a second overture from Pope to surrender. Pope’s messenger offered Smith a choice between unconditional surrender or “all the horrors of violent subjugation.” Smith told the man that he could not “purchase a certain degree of immunity from devastation at the expense of the honor of its (the Confederacy’s) army.” Smith instead opted to shift his headquarters from Shreveport, Louisiana, to Houston, Texas, where Major General John B. Magruder’s small Confederate army was stationed. Smith hoped to unite with Magruder and carry on the fight.

Meanwhile in Washington, Grant issued orders to Major General Philip Sheridan, who was preparing for the Grand Review:

“Under the orders relieving you from the command of the Middle Military Division and assigning you to command west of the Mississippi, you will proceed without delay to the West to arrange all preliminaries for your new field of duties… Your duty is to restore Texas, and that part of Louisiana held by the enemy, to the Union in the shortest practicable time, in a way most effectual for securing permanent peace… if Smith holds out, without even an ostensible government to receive orders from or to report to, he and his men are not entitled to the considerations due to an acknowledged belligerent. Theirs are the conditions of outlaws, making war against the only Government having an existence over the territory where war is now being waged.”

Sheridan was to take command of 50,000 troops to destroy what remained of Smith’s army. Sheridan asked to stay in Washington to participate in the Grand Review, but Grant insisted that he leave immediately. Grant explained that not only would Sheridan be forcing Smith’s surrender, but he would also be discouraging France from colonizing Mexico in violation of the Monroe Doctrine. Sheridan’s fearsome reputation for pillage and destruction would surely precede his arrival.

Smith soon received word both that Sheridan was coming and Jefferson Davis had been captured. With his army rapidly disbanding, he decided to finally negotiate. He dispatched his chief of staff, Lieutenant General Simon B. Buckner, to discuss peace, not with Pope at St. Louis but with Major General E.R.S. Canby at New Orleans. Smith was still reluctant to surrender and did not expect Buckner to make that decision without consulting him on what terms he could expect.

Buckner and Canby began conferring on the 25th, and the next day Buckner made that decision without consulting Smith. He surrendered the Confederate Army of the West to Canby’s chief of staff, Major General Peter J. Osterhaus, under the same terms Grant had given Lee. As fate would have it, Buckner had surrendered the first Confederate army at Fort Donelson in 1862, and now he surrendered the last.

Smith arrived in Houston on the 27th and learned that his army had been surrendered the day before. He refused to endorse the agreement, and on the 30th he issued a final order to his few remaining men in the form of an admonition: “Soldiers! I am left a Commander without an army– a General without troops. You have made your choice. It was unwise and unpatriotic, but it is final. I pray you may not live to regret it.”

Smith finally relented and signed the articles of surrender on June 2, aboard the steamer Fort Jackson at Galveston. Those who refused to give up were paid in gold and mustered out, including Jo Shelby and others hoping to continue the fight from Mexico. Smith himself would join them later.

The surrender of E.K. Smith’s Trans-Mississippi District meant that the last significant Confederate fighting force was no more. Some commanders who led small, less organized units continued holding out, including General Stand Watie. Others just went home, ultimately accepting that the war was over at last.

2 thoughts on “The Trans-Mississippi Surrender”