October 19, 1864 – Raiders targeted a Vermont town just over the Canadian border in what became the northernmost Confederate attack on Federal soil. 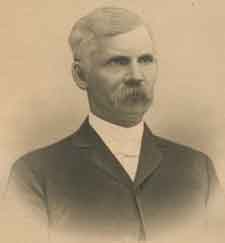 The Confederate government had authorized Lieutenant Bennett H. Young and 20 of his fellow escaped or exchanged prisoners of war to attack Federal towns from Canada. It was hoped that this would divert Federal attention from other theaters of war and inspire Confederate sympathizers to rise up against Federal authority in the North.

Over the course of several days, Young and his raiders arrived at the town of St. Albans, about 20 miles from Canada. Posing as vacationers and hunters, they were given lodging at various town hotels and boardinghouses. The raiders planned to burn the town and, if possible, rob the banks before attacking similar towns along the border.

They gathered on the village green at 3 p.m. on the 19th, where Young announced that he was seizing the town on behalf of the Confederacy. Residents ignored him, thinking it was a joke, until the raiders fired their pistols. Some people resisted, resulting in the killing of one resident (ironically a Confederate sympathizer) and the wounding of another.

Instead of burning the town first, the raiders broke off into groups of threes and robbed the town’s three banks. Armed villagers soon began firing at the raiders from the buildings ringing the square, wounding three. The Confederates burned several buildings with Greek fire, but no substantial damage was done. They then raced off to Canada with $200,000 from the banks.

A Federal captain on furlough quickly organized a civilian posse to hunt down Young and his men, who had broken off into small groups. The posse captured a few of these groups, but since they were in Canada, Canadian officials quickly took charge of the prisoners. Ultimately Young and 12 of his men were apprehended by Canadian authorities, and about $75,000 was recovered.

Federal officials requested that Canada extradite the raiders to the U.S. However, the Canadians put the men on trial and, after ruling that they were soldiers acting under orders, they were released on bond. They were never tried in the U.S. The St. Albans raid caused a sensation in the press, but it did nothing to divert Federal attention or inspire Confederate sympathizers.