October 31, 1861 – General Robert E. Lee returned to Richmond after this three-month campaign in western Virginia that many southerners considered a failure.

As October opened, Lee continued supervising General John B. Floyd’s Confederate Army of the Kanawha on Sewell Mountain. He had pulled troops from the Army of the Northwest to reinforce Floyd, leaving a token force to fend off Federals on Cheat Mountain, about 100 miles north. Opposing Lee and Floyd was a Federal army led by General William S. Rosecrans, which was falling back to its base of operations at Gauley Bridge on the Kanawha River.

Following the engagement at the Greenbrier River, Lee transferred troops from Floyd back to northwestern Virginia. This diminished the strength of the Confederates on Sewell Mountain, but Rosecrans was in no hurry to exploit it. The miserably cold, wet autumn was adversely affecting both sides, and a general engagement seemed improbable.

With the armies stalemated, Lee wrote to his wife about press criticism of his performance:

“I am sorry, as you say, that the movements of the armies cannot keep pace with the expectations of the editors of the papers. I know they can regulate matters satisfactorily to themselves on paper. I wish they could do so in the field. No one wishes them more success than I do & would be happy to see them have full swing. Genl Floyd has the benefit of three editors on his staff. I hope something will be done to please them.”

Farther north, a third Federal force in western Virginia led by Brigadier General Benjamin F. Kelley seized the important town of Romney after skirmishing there and at South Branch Bridge. Kelley, victor of the war’s first land battle at Philippi, commanded the Federal Department of Harpers Ferry. This action expelled the last remaining Confederates from the area. The feeble Confederate hold on the region was rapidly slipping.

That hold became even more tenuous when the male voters of 39 northwestern Virginia counties voted overwhelmingly to ratify the Wheeling Convention resolutions to secede from the rest of the state and form the new State of Kanawha. The voters also elected delegates to attend a convention at Wheeling, 10 miles from the Pennsylvania border, to draft a constitution for the new state.

The extremely lopsided vote count made this election legally questionable. The final count was 18,408 for secession and 781 against; this was about 40 percent of the voter turnout in the same counties for the previous year’s presidential election. The vote was not anonymous; voters had to tell the registrar whether they favored or opposed the measure and the registrar recorded each voter’s name. Most opposition came in counties not under Federal occupation. In Kanawha County, which was known to have many residents with Confederate sympathies, the count was 1,039 in favor and just one against. Federal military control over the region enabled the election to take place.

With western Virginia seemingly lost, Lee returned to Richmond to resume duty as military advisor to President Jefferson Davis. Lee assumed full responsibility for failing to curtail Unionist influence in the region. Many southerners considered his talents overrated, and his reputation suffered among those who nicknamed him “Granny Lee.” But Davis maintained confidence in Lee’s abilities.

The New State of Kanawha

August 20, 1861 – Delegates to the second session of the Second Wheeling Convention approved a measure seceding from Virginia and bundling the state’s northwestern counties into the new state of Kanawha. 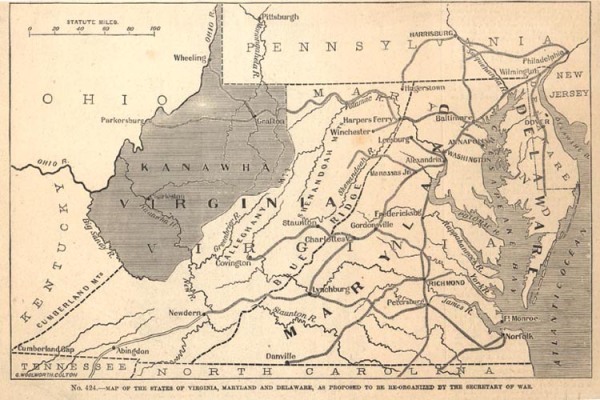 The delegates reconvened their legally questionable convention at Wheeling, 10 miles west of the Pennsylvania border, after adjourning in June. While the members had previously considered declaring the Virginia government null and void because it had seceded from the Union, the members in this session instead proposed an Ordinance of Separation from Virginia. Delegates set up a Committee on the Division of the State that included one member from each of the 35 northwestern counties being represented.

The committee submitted its Division of the State Ordinance on August 13, which shifted the focus of debate from whether to secede from Virginia to how many counties would secede. The ordinance absorbed all Virginia counties in the Shenandoah Valley and along the Potomac River into the new state of New Virginia (later renamed Allegheny).

Most delegates supported forming the new state, but some urged postponement for now. Postponement was rejected a week later when the majority approved an “ordinance of dismemberment.” Delegates also reached a compromise on the number of counties to secede; they would begin with 39 counties of northwestern Virginia and add any other adjacent county if its residents voted to join.

Extensive debate took place over what the new state’s name should be, as many delegates did not like the names “New Virginia” or “Allegheny” proposed the previous week. A suggestion of “West Virginia” was also rejected. Finally, the name “Kanawha” was approved by a vote of 48 to 27.

The secession of “Kahawha” from the rest of Virginia violated Article IV, Section 3 of the U.S. Constitution (“no new States shall be formed or erected within the Jurisdiction of any other State… without the Consent of the Legislatures of the States concerned as well as of the Congress”). But the delegates approved the move nonetheless and resolved to submit the ordinance to the people in a popular election scheduled for October 24.